A different kettle of fish

Since day one Nacho has been a fussy eater... in a good way. Nacho only eats dried cat biscuits. We offered him the expensive wet cat food samples the vet gave us on his first visit and he refused to try them. We tried salmon, prawns, cooked chicken, and raw mince and everything was sniffed and entirely rejected without the smallest crumb passing his lips. The only thing he seems to like that isn't cat biscuits is cheese. He doesn't even catch birds or mice because they aren't dry crunchy biscuits! I'm not sure he's fully read the manual on how to cat. We've long given up on trying to get him to taste anything other than dried biscuits.

So, last week Samosa came into our lives. Day one saw her refuse everything edible and even water. We ended up feeding her water on a teaspoon. We were worried, but shouldn't have been. Turns out it was nerves. Moving in with a new family apparently makes you a nervous wreck for precisely 18 hours, then you bite the bullet and decide you're willing to give wet cat food a go, followed by the biscuits, whiskas kitten milk, cheese, meat, fish, crisps, breakfast pancakes, and everything dropped on the floor including a strawberry. This is going to be a problem because we're used to leaving a snack on the coffee table knowing there's no chance Nacho will so much as smell it. Just imagine Léon's face last night when he left a plate of mash, IKEA meatballs, and meatball sauce on the desk in his room, only to come back from the loo and find a rather small girl sitting on the plate wolfing down more mash than he thought was humanly possible! 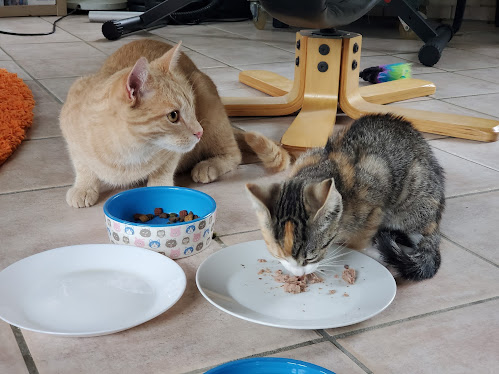