Meaningless questions with no answers

Yesterday, driving down to IKEA, Thomas and I were discussing how just 100 years ago the villages around where we live must have had every sort of shop imaginable, and therefore some people never really left the 10km radius around where they were born and yet today travel is so integrated in our psyche. I mentioned that my own grandmother never went further than Wolverhampton in her 68 years. She never went as far as where her granddaughter, and five of her great grandchildren live. She never even saw London.

Growing up we were told stories of gran's stay in Wolverhampton, when her sister, Rita, was dying. The sweet story went that when my poor great aunt was diagnosed with cancer in her late 30s, my gran (her little sister) moved down to care for her and her 6 year old son, taking my 5 year old mum with her. Gran was 33 at the time. Mum started school in England, Gramps got a plumber job and gran cared for Rita. One day after six months, mum came home from school and nonchalantly greeted my very Glaswegian Gramps with 'ello love' in a very Brummie accent. Gramps promptly packed two cases and told gran no wean of his was growing up with a Brummie accent and took the train back to Glasgow telling her to follow home once the inevitable came to pass! Never again did my gran voyage further than Blackpool.

I know they weren't the richest pair, but I am puzzled that they never went anywhere, they both worked after all and Gramps got a free house and van with his job. Gran told me at least once a month for the 16 years we overlapped that she had two dreams: to ride in a helicopter and to visit Switzerland. The Switzerland dream came up again and again. It suddenly struck me yesterday that I never once asked her 'Why Switzerland?' I mean: was it mountains? cows with big bells? cuckoo clocks? chocolate? I even went to Switzerland on a school trip two years before she died and brought her back a rather cheesy cuckoo clock and some chocolate but still she never told me why Switzerland and for some reason I never asked. I suddenly realised yesterday that the one person who might know is suddenly gone and now I'll never know. When death comes suddenly, you forget to ask the questions that don't really matter.

Since February 26 there have only been two people left on this earth with the key to my childhood memories. I remember my mother-in-law saying that the day her mum died, her childhood was nowhere other than in her head, her only sibling having died before their mother, which is even worse I guess. Maybe when I'm gone, my kids will appreciate their army of siblings even more than they do now.

Here's a pic of my poor gran who never got to Switzerland. 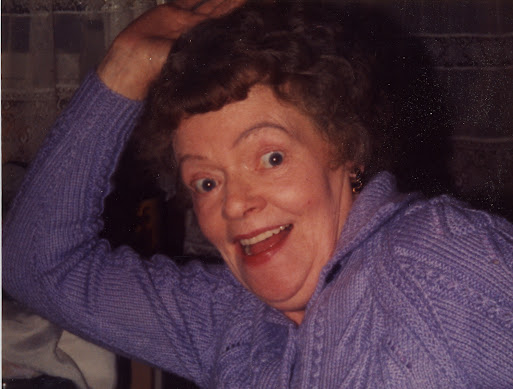