A couple of weeks ago I asked Thomas if Danes did Halloween. Remember, he hasn't lived here since 2001, and his answer was a definite no...

After a shopping trip to Odense last Saturday, I had a sneaking suspicion things had moved on in his home country since he last called it home.  Here are Anna and Amaia in the big supermarket, Bilka! 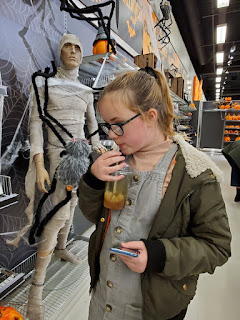 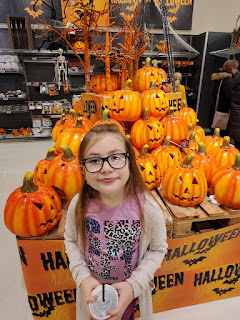 I guess Thomas has become one of those weird stateless people who are neither fully at home here nor in Scotland, and we will soon follow him down that path, of course.

I'm still not sure he was fully convinced, until the neighbour's lit pumpkin turned up on Monday night, followed by another two by the roadside the following day. Yesterday, Léon was invited to a mate's house for afternoon coffee, but he didn't show up home till three hours later, fully made-up with everything short of false eyelashes. He was less sure about the large bag of 50% liquorice sweeties he was clutching when I picked him up, but as I drove through the next village almost every house had pumpkin-lit paths and driveways. We, of course, gave in and stuck a neep at the end of our driveway, as well as one of those alien pumpkin things, which resulted in small children ringing our doorbell and threatening us with 'slik eller ballade' - (sweeties or trouble - I wonder what that could possibly mean!) 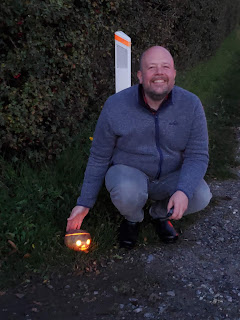 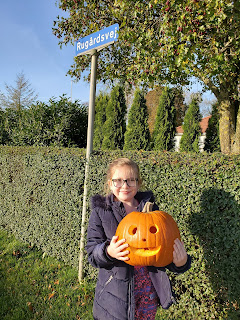 Léon did make me laugh... He fully admitted to being a chancer - having gone into the local Co-op, figuring nowhere he knew had more sweets than a corner shop, and trying trick or treat on the check-out operator, who laughed, congratulated him for having balls but told him, sadly her hands were tied! I guess you get nowhere in life, if you don't try!

It is nice to see him having fun though, back home he hasn't been out guising for a couple of years as it was no longer the cool thing to do - here, cool seems to matter a wee bit less than having fun.