I'm going to have a wee rant - more at myself for being gullible and stupid, in fact, than at the crooks and deceivers, really.

Two autumns ago, I was at a linguistics and lexicography conference in Leiden, in the Netherlands. Noticing it finished at midday, I booked my return flight for about 10pm, so I could have a day wandering around Amsterdam. I found myself, like many tourists, in the flower bulb market, given it was that season. Laden with blue tulips, I headed home, planted them and waited for spring. Spring came and my garden filled with boring, bog-standard red tulips. As the first few opened I was puzzled and then I suddenly realised, with a wry little smile... I had been well and truly hoodwinked. I assumed the business model was: buy in the cheapest, most boring bulbs, package them up as something exotic and expensive, palm it off on the foreign tourists, who won't realise they've been sold a pig in a poke till many months later and many miles away. Part angry, part in awe of their balls, I laughed it off and carried on. Red tulips are better than no tulips, after all.

Last month I was in Amsterdam, and of course it was tulip planting season again. Ok, I thought, I'll give you the benefit of the doubt. Maybe it was just an honest error... This time, I bought only one packet of the blue bulbs, and from a different vendor. I have planted them in a specific spot in the garden, away from all the others, so I know where to look in the spring. I won't fully be holding my breath however. To test my theory sooner, they were selling amaryllis bulbs too. Blue or red, they were the same price, so at least I was only being done on description, rather than price, this time! I picked one up. Here is its tag: 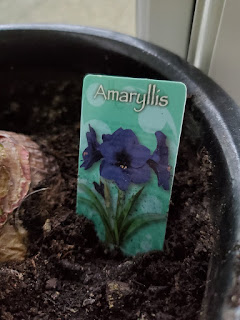 And as we run down to Xmas it has been getting taller by the day. Today, it looks like this: 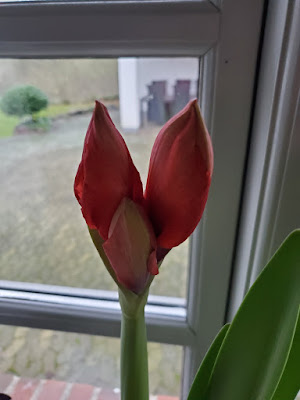 Any bets whether it is going to be red or blue when it opens? 😡

So, in warning, I am likely to conclude in March or April, that Amsterdam flower market is there for the sole purpose of doing the tourists, don't let them get you! 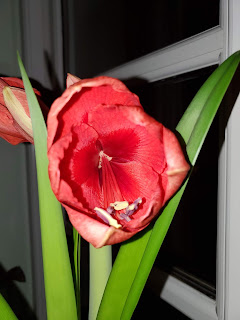