Léon is very European. There's nothing he loves better than sitting at an open-air café, then wandering aimlessly round a typical southern European market. Recently he was lamenting the fact that northern Europe is much less market-y. It suddenly struck me I hadn't been to the Barras since the older two were wee so I told Léon Glasgow had a market too and although it was maybe a little different to what he was used to, I'd take him along for a look... 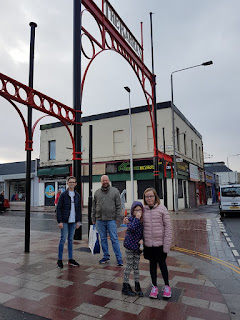 Off to the Barras we went one Sunday just after lunch (note to self, go much earlier next time, as most things we starting to pack up when we arrived). However, Léon's reaction was wonderful! First we passed a guy selling bootleg cds from a camping table. Everything was on display of a sheet, the corners of tightly held, ready to leg it if the police came round the corner. Léon naively asked why the covers were just poor photocopies! Lol. Then it started to rain so we moved to the undercover bit. Every stall was more peculiar than the next; a mix of items, I'd tend to bin or give to charity: books, cds, ornaments that came out of the ark, odd mismatching wine glasses and assorted plates, used bras and slippers! We moved on to furniture, obviously from house clearouts, ranging from ornate, to chuck-outable tack. The traditional Scottish sweetie stall with jars of soor plooms and cinnamon balls drew in the girls, of course. Léon's mouth fell open when we rounded a corner to a stall selling only used miscellaneous cables; there were scarts, kettle cables and all sorts of transformers that seemed of little use to anyone piled a metre high like the biggest plate of black spaghetti you ever saw! To one side was a box containing, I'd reckon, over 500 old remotes for TVs, DVD players and satellite systems. Again, I can't imagine these were flying off the shelves! Lastly, a stall selling leather belts at £2 less than he'd recently paid on Amazon was the clincher. 'Oh mum, it is just like walking through eBay!' he smiled, 'When I'm older I'm going to get a stall here and make enough to buy my first Porsche!' Nothing if not an optimist, my boy! We came home with a quality German Bierstein and an ornate Aztec/Spanish chess set.

I must take him up again to experience the magic nearer to Xmas, health permitting.