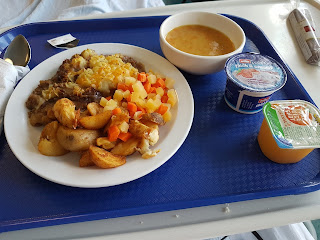 It looks like I might have spoken too soon on Tuesday. My attempt at an NHS-free week didn't even reach the 48 hour milestone.

The day had started stressfully as I had pre-booked a taxi to take the kids to school as Thomas wasn't home. The taxi had not turned up and when I rang to complain they'd blamed the O2 network outage. The upshot was that I paid over a tenner to have my kids delivered to school late. I was not amused.

By lunchtime eating had become a trial as sitting at a 90 degree angle was becoming increasingly difficult. Something was burning deep inside me on the left of my wound and something was making the surface of my skin so sensitive, I could barely brush the back of my hand against my abdomen. I googled again, desperate not to end up 'back inside'. I couldn't work out what it could be. An infection seemed unlikely given I was on my 12th straight day on antibiotics. Had they left the scalpel in there by mistake?

I had been booked in with the nurse once again to change my dressing on the Thursday at 3.

I found sitting in the car almost impossible so had to recline the seat on my trip to the medical centre. I couldn't sit in the waiting room because I basically couldn't sit. The nurse took one look at me and called the doctor in. She'd seen me on Tuesday and saw a difference. After a poke and a prod, he decided I needed admitted for a suspected abscess deep inside on my left hand side. The weans were dumped on Charlotte though asked to be in charge of making some sort of meal as she had a university economics exam the next day so was studying in her room. I texted Thomas who had braved going to his office in Edinburgh rather than working from home for the first time in weeks to say mum was driving me to hospital though this time the GP opted for QEUH, and I wasn't going to argue.

On arrival, I became aware myself of how taxing even walking was becoming. They brought the Registrar in who examined me and helpfully suggested that maybe during the original operation, they'd cut the supply to or from my left kidney and that was potentially the problem. My blood and urine tests were all fine and infection free but that could be explained by the fact that as a reasonably young (!) and healthy (till 11 weeks ago) person, my other kidney would simply have taken over all function.

To ascertain if this is the issue there are two problems. Firstly, I need transferred to the actual main 'Death Star' building for a renal CT scan (I'm currently in the maternity and gynaecology block) but no appointments have become free over there today. And secondly, my veins have all thrown in the towel after nearly a month of abuse and they can't CT scan me until they can get the dye into me through a cannula. All attempts at putting one in yesterday failed ☹️

So I'm stuck here thumb-twiddling once again, missing my normality and my family life. I have well and truly had enough now. And that's before anyone tells me how to fix my kidney, if it turns out to be that, or what hypothesis B is, if it isn't that.

I feel autumn was only just beginning when my life spun off into some parallel and unpleasant universe. I missed all of autumn, the beginning of winter and the whole Christmas season. Santa still hasn't done any real shopping, I haven't heard a single Christmas record or seen any Christmas lights or markets and I'm missing the whole build-up with the kids. I've missed the school Christmas gala, the open classroom day, the p7 Christmas assembly. The Santa Dash on Sunday is out both as a participant and as a photographer 😭 And our annual trip to IKEA'S party has been cancelled too. Next week the girls are carol singing in Silverburn - is there any hope?

I'm going to get to January bypassing Christmas altogether at this rate and that's not nice when you have a young family.