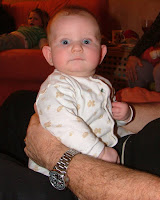 When Léon was about five or six months old, Charlotte invented the nickname 'Pudge(man) for him. Well, he was kind of pudgy back then - unfortunately he didn't shake off the name till he was about eight and people were always puzzled why the skinniest member of the family went by 'Pudge'.

For about three years he got to be Léon, but now she's come up with a new name for him. It started out as 'Doughball' because he was forever doing the daftest things, to her mind anyway. He was so consistent in his Doughballness, that she started shortening it to Doughb', which seems to be his current nickname.

On Thursday Charlotte had her Adv Higher Spanish prelim. You get disqualified from an exam if you are found to have a mobile phone on you, but as she keeps all her Spanish notes on her phone, she wanted it before the exam started, so leaving it at home was out. As S6s don't qualify for lockers at their school (fewer subjects, less need than the lower school), her original plan was to borrow Léon's locker key for the day, put her phone in there for the duration and then retrieve it, but of course 'Doughb' has managed, some time in the last fortnight, to misplace his locker key (with his PE kit inside!) so plan A was out.

Strangely, she decided to trust him to look after it while she was in the exam hall. As they got out the car, I saw her zipping it into his inside blazer pocket, not trusting him to do it himself. The plan was set, on the way up to school she had ascertained that he had Mandarin when she finished, so if she went to the Mandarin class and asked to get her phone back, all would be well. Of course, Doughb' couldn't be trusted to have remembered his timetable correctly, could he? So when he suddenly realised mid-morning that he, in fact, had French, not Mandarin when her exam finished, he helpfully sent her a text to rearrange where she had to meet him to pick up her phone. Doughb'!!!!
Posted by Phyl at 11:07 pm