Charlotte turned 17 in January and wanted to learn to drive immediately (not sure why given she hasn't a hope in hell of affording a car, but I guess I did the same at 17).

In February she was too busy with prelims, March with oral exams, April and May with Highers, June with going to Nicaragua, July with going to Italy, August with settling back into school, so I figured it was off for this year...

That was till she started asking about my availability on Thursday afternoons. I work from home so can move stuff about within reason. It turns out that Thursday afternoon is the only time she has free periods when she hasn't volunteered to be a teaching helper for the lower school. So yesterday she ordered herself a car (dual control for £11 for 2 hours).

It's been a long time since I sat beside someone who has never ever been behind a wheel, the last time was possibly Derek in 1988! When Thomas learnt he had the basics and Marcel took some proper lessons, so there I was with my first millennium baby explaining 'that's the clutch, the brake, and the accelerator, this is the gear stick and that is the hand brake...' She surprised me with a few odd questions like 'are the three pedals in the same order in all cars?' Hahahaha - can you begin to imagine?

But then she really threw me... I'm not much of a gamer; Candy Crush Soda on my smart phone for ten minutes at bed time is the extent of my gaming. She asked 'You press the brake to stop, right?' of course, then she followed up with 'and once it has come to a stop, if you press the brake again at the same time as putting the gearstick in reverse, you go backwards, right ?' WTAF?????? Sorry? Mind-blown! Well apparently on 'Need for Speed' (something on a PS3, I think), that's how you make your car reverse - the  L2 button (whatever that means!) Why on earth would you make a game that teaches kids that is how you drive a car? Are they insane???? She seemed a bit put out that she'd been misled! Kids today probably think they know how to fly a plane if they've got a flight simulation game 😜.

All in all it went well. She seemed to get the hang of hill starts fairly quickly, though I still need to get it through to her that you don't pull on the hand brake to stop 😂. But we definitely came top of the class that day... The other mum who hired a car with her 17 year old son at the same time as us returned it after just twenty minutes of the two hour hire, citing the fact that she'd got in such a big fight with him that he had pulled the car over and stomped off home leaving her to return it alone! She was last seen making her way to the pub, fuming 🤣. 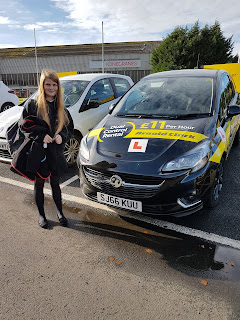 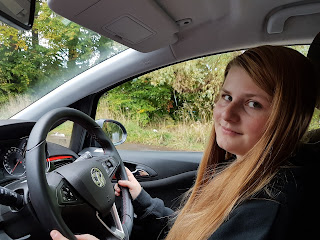