Ever since I had kids, we've spent October in parks searching among the leaves for conkers... Early

on, when Marcel was two or three I found a tree hidden in a far corner of the Botanics that seemed to have escaped most of the passing schoolchildren so we were always guaranteed to get two or even three there. It was enough to play conkers with, well once at least.

Then I moved in with a Dane. Unlike Scots, Danes don't battle with conkers, they build animals (and more) from them (how civilised!) This posed a problem - try making several animals out of just three conkers. So conker season has always been a bit of a failure, until this year!!!

We went for a walk round a graveyard in September. Much to our surprise the trees had already started dropping their conkers and more to the point, it would appear kids hang about cemeteries much less than they hang in parks(!), so we had no competitors! We left all the damaged ones for the squirrels, but we still amassed a whole bag full. We'll be able to have a major conker animalfest next week when the kids are off for the October week and the rain inevitably leaves us housebound. Woo hoo. 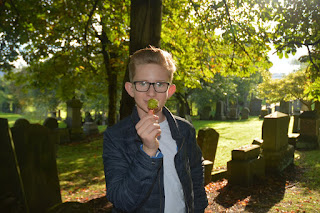 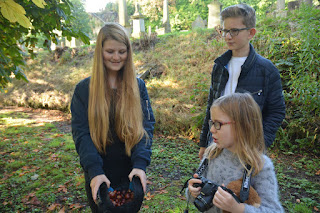