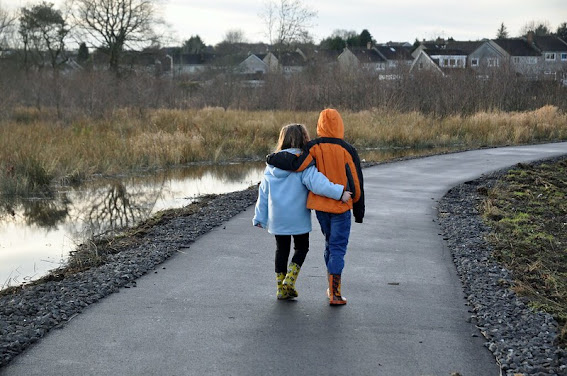 Sometimes, usually in fact, life with five kids is fairly harmonious... very occasionally though, little tiffs can occur... tonight was one of those nights. Léon and Anna got into a fight about who could throw a basketball further (as you do!) They were out on the street so I didn't hear it all but I heard Léon winding, and I heard Anna shrieking as if she was being tortured (which of course meant only her pride was being hurt, as that is much worse to Anna than anything else!) As they both stormed back into the garden Anna was shouting at Léon about cheating and other things, Léon was grinning calmly (something which winds Anna up much more than any anger or aggression would!) Anna shrieked and shrieked and cried and grumped as Léon waited patiently to get a word in and when she'd finally run out of steam, Léon floored me with the following calmly-spoken comment: Anna enough! Would you please talk to me like I'm your brother... you're standing there screaming at me like I'm... I dunno... David Cameron or something!

I, of course, reacted in the only way you can to such a classic line - I ran for a pen and post-it note!
Posted by Phyl at 11:55 pm