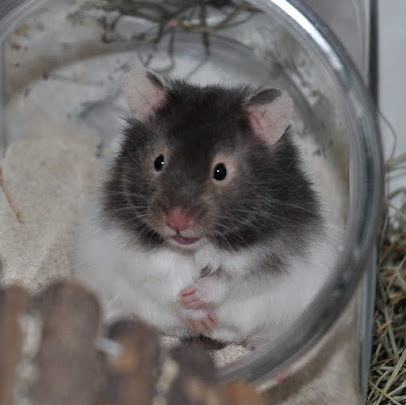 After last week's upset, we sneaked out on Tuesday morning to acquire a new family member. We got to see two boy hamsters and four girls. One of the girls, an all-over brown one, had already been reserved. That left this one, one who was almost identical to Rosie, right down to the triangle, but with red eyes (so we ruled her out as being too much of a reminder) and finally a really pretty fluffier creamy striped one. Of the boys, one was also really fluffy and coloured like a ginger cat. Almost immediately I started to toss up between the cream girl and the ginger boy. The owner said this grey one was friendlier so we played with all three for ten minutes before ruling her in and the creamy one out. She was a bit too chewy to live with young children unfortunately as she was stunning. This grey one was a tiny bit more curious, The ginger boy was so laid-back we weren't sure we'd ever see him again once he discovered our deep sawdust compartment, so she was chosen.

Once we picked the kids up from school and brought them home to their surprise, we had a conference on what to call her. Everyone, excluding Marcel who was at work but including granny, who'd dropped in for coffee, had opted for Lily but Anna was on a bit of an over-tired, post-school power trip so dug in her heels. Eventually she gave in with pouted lip and folded arms. The following morning, well-slept, she decided she needed to climb down though. Firstly, she tried to claim she had misheard us and thought we were trying to name a girl hamster 'Louis' and claimed that had been the reason for her strop. But later in the day she decided once again she needed somehow to have one up on her siblings so told me quietly 'Since the others got to choose her name, I think I should be allowed to choose her middle name'. Not realizing such a small animal needed one, I saw no harm in agreeing. Then she announced this tiny ball of fluff would be known forthwith as 'Lily Mildred Buchanan-Widmann'. Apart for making me laugh, I do wonder how she's even heard the name Mildred. I thought they all died out when Phyllises were still in nappies, and that was nearly 100 years ago!
Posted by Phyl at 1:02 am