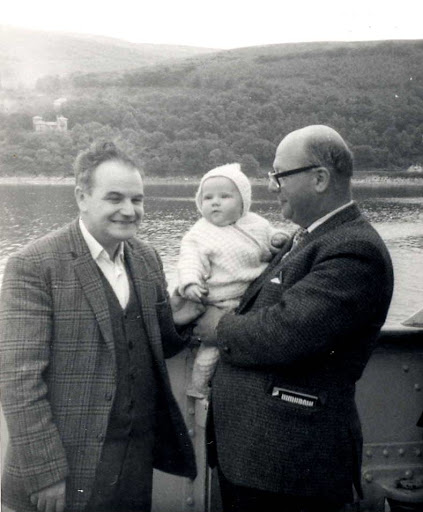 I was born with three grandparents. (The untimely death of my grandmother, five days before my birth, changed my name (from Linda to Phyllis) and my relationship to my grandparents forever. Let's take Willie first.

Willie was a school janitor and lived in the little building attached to the front of this school in Govanhill until 1981.

(Don't you love the way Google Maps can take you down memory lane without you ever having to leave your bedroom!?)

I don't know if Phyllis, my dead grandmother, lived here too or if he moved into it after her death but it is the first place I remember him living. It was situated exactly six miles from the house I grew up in. We visited him here probably twice a year. He also later had a 'girlfriend' who lived in Burnside so we would go there once a year too. In addition, he would drop by our house once or twice a year. So all in all we would probably see him six times a year for an afternoon.Visits were not planned and when we turned up unannounced he would make us a cup of tea and he'd chat to my parents for an hour or two. I don't remember Granda ever playing with me or taking me away on a day trip, despite his relatively young age (52, when I was born) and I never stayed a single night at his house. He never stayed a night at mine. He never babysat me alone so we had no chats. He never helped me with my homework so I have no idea what he was like intellectually. No Christmas days or birthdays were spent in his company either. Months would pass between our visits. Months feel much longer to a child than to an adult so the three or four month stretches between his visits meant that he was not really on my radar. He was mostly invisible in my life and as I was a child, that didn't bother me. Despite the fact that he lived until I was 22, I never knew him, not really. Any information on his personality was gathered not from my meetings with him but from anecdotes told to me by my father, mainly after Willie's death.

He was injured in a house fire (caused by his downstairs neighbour) during my finals at university, when my parents were abroad. That made me his next of kin so I felt I ought to go and sit with him in intensive care. His fingers were blackened because of the fire and his flesh smelled of smoke. He lay in a hospital bed and I remember the feeling of trepidation as I walked through the door for the first time. He was my grandfather and I barely knew him. What was I going to say to him? How could I comfort him? He'd never told me anything about his life, about my father's childhood, or about my grandmother. We'd barely got past milk, no sugar in twenty years. He was unable to speak after the fire so there was nothing I could do other than sit with him. I remember taking his hand in mine. It was large and rough in comparison to my very small hand. I looked at his nails as I held his hand and realized I had never touched him before. Of course I probably sat on his knee as a toddler but this was the first time in my living memory that I had held his hand in mine. We'd never hugged. I was 22. I thought I was grown-up back then but now I know I was merely on the brink of adulthood. I had so many questions I wanted to ask... I'd spent 22 years carrying his wife's name and I had never asked him what she was like. He had never told me anything about her. I guess the timing of my birth had put a wedge between us. It could have gone either way at the time. He could more or less have moved in and been a permanent fixture in my life, or he could have shrunk from us and the week I represented in his life history. The latter is what happened unfortunately. He didn't write down anything about his life, no memoirs, and there are few photos so I know so little. When my gran died that week, it was as if he died too. I went over in my head how things would change once he got out of hospital. I would visit him and get to know him. I would ask him about his life, his parents, his siblings. I would get to know the man who was my grandfather, the man who had fathered my own father, who was unimaginably dear to me.

We held his hand for 22 days and then he died. He never spoke again. I have no idea who my grandfather was. I know he must have been dear to my father because I remember his tears at his death. One morning before my mother and brother were awake, dad and I sat looking through the only tin of photos he left behind until dad, who was 47 at the time, dissolved, sobbing 'I'm an orphan now'. That man who hadn't let me in must have been special after all. I feel terribly sad to have grown up with a grandfather who was able to visit me but didn't, who was able to have created memories for me to cherish, but didn't and who has left me with many 'what ifs'.
Posted by Phyl at 11:07 pm