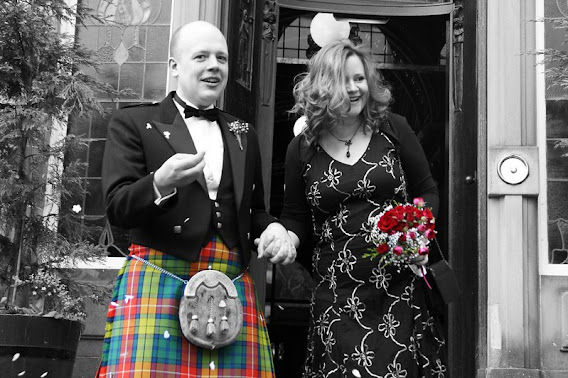 It's never dull being married to a foreigner... I should know, after all I've had my fair share of foreign husbands!
First time round I changed my name - It was more the done thing back in '91 than these days. I wasn't so much asked by the registrar if I wanted to change it, as told when I signed the marriage certificate 'This is the last time you will sign Buchanan'! That seems strangely out of date now - though I have to say I am still more often than not called either Mrs Gautier - when one of the schools phone me, Mrs Widmann, when someone rings my doorbell (marked Thomas Widmann and Phyllis Buchanan) or Mrs Buchanan-Widmann. I even get Mrs Buchanan by people who have sussed that a) I am married, b) I call myself Buchanan. Ho hum! One day someone will address me as Ms Buchanan as it says on my personal documents!
Anyway that wasn't the topic - just one of my bugbears. I keep hoping I'll still be around when society catches up with the reality that Miss Gautier's mother is no longer necessarily Mrs Gautier, and that if Master Gautier joins Beavers, sending a large Beavers welcomes the Gautier family card, though it may be a nice gesture, isn't always appropriate!
So - back to foreignness. First time, as I said, I became Gautier. So I too had all the fun. People, of course, have heard of Gautier because of Jean-Paul Gaultier. Gautier actually has three different spellings is France each with a different frequency. Firstly, and by far the most common is Gauthier, second and not nearly as common is Gautier, third and almost unheard-of is Gaultier. But of course we Brits only know one Gaultier - so I spent half my marriage correcting the spelling of my name from Gaultier to Gautier (and still have to on everything my kids ever sign up for). And that's just the clever ones who actually sussed my name at all. I got various fun ones over the years: Phyllis Gucci (I wish!), Phyllis Gottier, Phyllis Got-here, Phyllis Goatie, Phyllis Goatbeard... Snailmail caused daily bouts of hilarity.


Then of course I got divorced, but none of the fun was lost, given I still have three house members with that surname. I moved in with a Widmann. That's not too hard, surely? Oh you'd be surprised! Often he simply loses an 'n' and becomes Widman, but we've had Whitman, Woodman, Whiteman(!), Wadman (is that someone with lots of money?), Windman (I won't suggest what that might be!) and finally last, but definitely not least my personal favourite Thomas Wild-man! I have actually had the postman come out with the words 'Do you have a Wild man here?' (None of your business, postie ;-) ) I know I stayed Buchanan this time round but if he gets Wild-man often enough, I might just consider a name change. Life would never be boring being Mrs Wild-man, surely!? It's very Tarzan and Jane ;-)
Posted by Phyl at 1:21 am