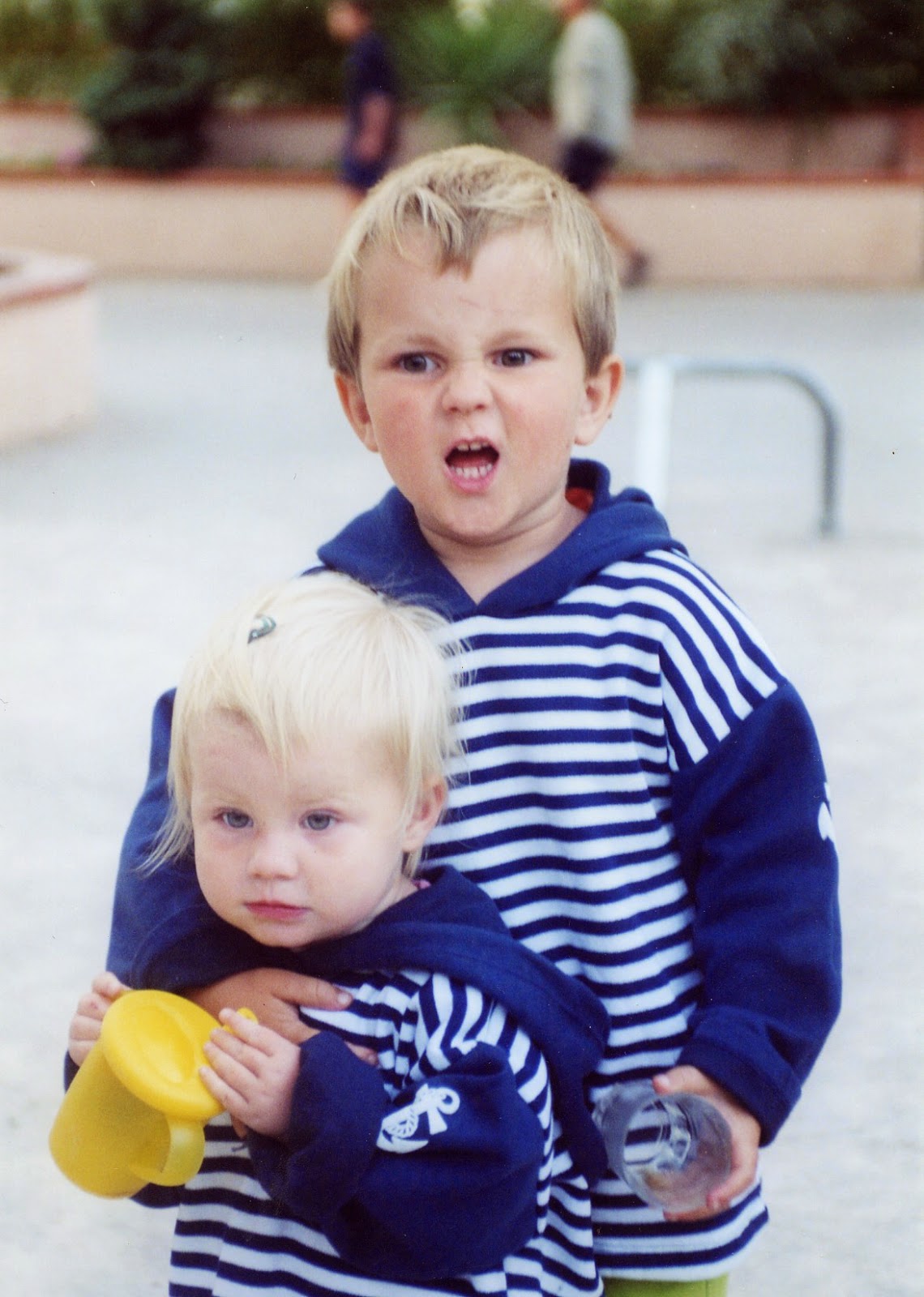 With all the anniversary coverage, Marcel turned to me on Friday and asked me to tell him how we spent 9/11. So I thought for him and my other children, Charlotte in particular, I'd write it down.

Marcel had just turned four, Charlotte was twenty months old. As neither was of school age, we still took the opportunity to holiday out of season to save money. We had been in Argelès-sur-Mer for about two weeks at the time. Most days we drove to different towns but on that day we decided to spend the afternoon in the campsite swimming and reading while the kids played. This photo, taken on 9/11, shows the exact spot where I was playing with my kids when the world changed forever.

In the ten days preceding the attacks, I remember there had been a slight escalation in terrorist attacks in Israel. A bus stop had been bombed killing two or three, a restaurant too, things were blown up in return in Gaza and the surrounding area. I had been reading about it in the French press.

I was reading a book beside the swimming pool after lunch on a perfect day. The campsite was almost exclusively French.  It was fairly busy with families. André was around but not beside me. Maybe he was back at our hut, or at the showers or somewhere - I can't remember. A couple walked by chatting and I caught the word 'attentat' as they spoke in low but animated tones. A few minutes later another crowd of French people were talking in the distance and the word 'attentat' was repeated again. I started to assume there had been another bus bomb in Israel. The third time I heard the word 'attentat' in five minutes, I began to wonder. However serious the terrorism that was taking place in Israel at the time, I found it hard to believe that everyone around the pool would be so interested in it that no one was discussing anything else. I got up, gathered up Marcel and Charlotte who were paddling beside me in the pool and walked towards the bar where there was a smallish wall-mounted TV. As I approached I was struck by two things. The complete and utter silence inside and the volume of customers. I told Marcel and Charlotte to stay outside as I stuck my head in - there were the usual kiddie play things outside the bar - a  seesaw and the likes and we were far from any roads so in no danger.

Nothing could ever have prepared me for what I was walking into. I am quite small, so with standing room only, it was hard to see what was happening. Several hundred people in various states of undress were standing shoulder to shoulder, many with tears silently rolling down their faces. Almost every man and woman in the room had their right hand clutched across their mouth. I suddenly knew this was bigger than a bus bomb. I tried to stand on tiptoe, then I saw it on the screen. I saw New York, I saw smoke coming from both towers against a beautiful blue backdrop. I knew in an instant that this was my JFK moment. I would always be able to replay this in my head no matter how long I lived. Involuntarily, I felt my own right hand grab for my mouth united with all the others. I looked from the screen out of the window to my two babies in what seemed like slow motion and I wondered what had happened to the world in which they would grow up. I cried silently with all the others, going in and out holding my kids tight and crying hard. No one felt they had to hide their distress that day. Everyone cried together - men, women, kids, old and young - all nationalities.

Many people describe 9/11 as a moment of silence followed by a cacophony of mobile phones. I guess it was like that in offices, schools, cities but the one place you don't take your mobile is a swimming pool, so unlike others who experienced it very publicly, I was not alerted to the magnitude of what was happening by the number of phones ringing simultaneously.

I have no idea how long I stood there. It must have been the best part of the afternoon. I bumped into André and had no idea when he arrived there. No one spoke. We didn't speak either. There were gasps when the towers came down. There were screams when people became aware of the 'jumpers' but no one said anything. People touched each other, held each other, hugged strangers in distress but in complete silence. Only the voice of the French news reporter was speaking in the room all day.

We had no TV or radio in our holiday hut so I found myself driving round in circles listening to the car radio news in French all evening and most of the following week. We took turns to watch the bar TV, one staying out with the kids, for the rest of the week. There was a lot of silence, crying and hugging of the kids. They looked bemused but somehow knew not to ask what was wrong with me! We decided, given we had to fly through London later in the week, showing the kids repeated footage of a plane full of tourists being used as a bomb was unwise. The same news was being played over and over but somehow we couldn't not listen. It was still sinking in. Although the kids never actually saw the news, we later realized that despite their tender age, they were listening to the radio in the car as Marcel asked us to explain the odd French word he didn't know. Although they were both predominantly French-speaking at that time, suicide bomber and the likes weren't terms they'd heard at home.

I remember flying home the day America re-opened its airspace. We flew Barcelona London, boarding next to the Delta flight to Atlanta. I have never, before or since, seen security like that day. For every passenger there were two policemen carrying guns as big as rocket launchers. It made your blood run cold. I presume London too must have been on high alert but we got home. Inside the plane was eerily silent too. We flew Barcelona London Prestwick and no one spoke. There was an audible sigh on each landing but nothing else.

I remember blue sky affecting me for a long time afterwards. From my office window I had a beautiful view of the Campsies and the flight path into Glasgow. I couldn't watch planes flying low against a blue sky without bursting into tears and thinking about my kids' future. Sabine, who I shared an office with at the time also had young children and we'd often find ourselves in tears, hugging, worrying silently about their future.

I guess the ten years haven't brought any distance, I still find it hard to watch. I still relive it as if it was new. I feel there is an invisible barrier in my head sometimes between my children - the pre-9/11 two and the post-9/11 three. Two were brought into a more innocent world but were so young they will never know it, three were brought into this new, tarnished world and there is nothing I can do to change that except teach them to love.

On 9/11 one thing I did do instantly was to resolve to go to New York. I had always wanted to go but after 9/11 I felt I had to go. When I left André five years later the first thing I did was to fly alone, with my baby (Léon) to New York to spend some time healing the wounds of my marriage, and finding myself again amongst the debris. I blogged the whole trip in various postings at the time. It was my Shirley Valentine moment. New York helped me so much. It will always feel like a home from home to me.
Posted by Phyl at 1:23 am