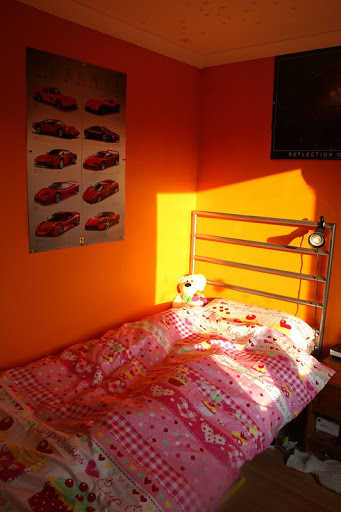 Something is happening to my little girl...

Charlotte has been a bit of a tomboy since she could talk. It started at three when she asked for Marcel's old football top. From there she refused (after the first day of primary one) to wear a skirt to school and never ever wore her hair in a ponytail or the likes. She had a football duvet cover and lived in cast-off football strips much to my horror. (In my youth I had been a very girlie child who would have fainted at the thought of tree-climbing and had spent many years painting my nails and playing with make-up).

Even last summer Charlotte was still in camouflage and putting Ferraris on her bedroom wall.

One day in spring I was in ASDA and I noticed they were selling a pink T-shirt with cupcakes on it. Given she hadn't worn anything non-androgynous in seven years, I opted to buy it at a fiver and put it in her drawer in the vain hope her excessive love of cake would invite her to explore her feminine side (before she suggested attending the p7 leaving dance this year in trainers and a pair of jeans).

To my great surprise she took the cupcake t-shirt on holiday and wore it not once but every second day!
Pushing my luck, this week I noticed they had excessively girlie duvet covers on ebay for less than a tenner, again covered in cake. I bought one and left it wrapped on the end of her bed. I didn't dare hope my wee girl would like it. At bed time she came bouncing downstairs excitedly and asked if I would help her put it on her bed so she could go to sleep!