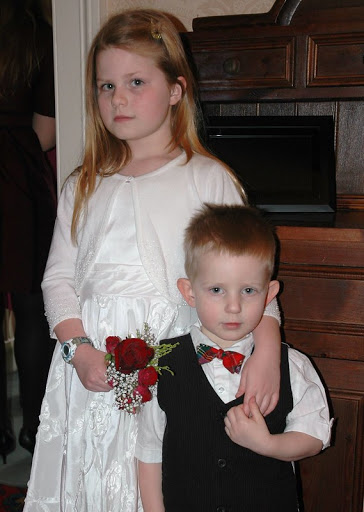 I thought when I gave my kids the names Charlotte and Léon-Olivier that those two names were dissimilar enough not to cause any confusion. Silly me! Every day since the kids went to France to visit their Oma, Anna has got up looking forlorn and saying 'Lala, Lala'. Now given Léon called Charlotte 'Lalo' when he first started talking, then 'Latlotte' and now finally Charlotte, I assumed 'Lala' was Charlotte. I showed Anna a photo of Charlotte and asked who that was - Anna replied 'Lala'. Bingo! So all week I assured her every morning that Charlotte would be home soon and gave her breakfast. Last night they returned. Charlotte walked in - Anna shouted 'Lala' and hugged her. Then Léon walked in. 'LAAAAALAAAAA' Anna shouted getting up on her feet for once, walking towards him arms out-stretched before collapsing in his embrace muttering 'Lala, Lala, Lala' over and over. Very confusing!
Posted by Phyl at 10:19 am