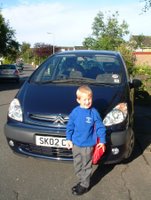 All summer Citroën have been harassing me about my Picasso. It was recalled for safety reasons - something to do with the wheels - apparently if they didn't urgently fit something to each wheel, the tyres were going to explode or something similar. I had a total of 3 recorded delivery letters in 7 weeks. Excuse me for not see the urgency but I have had this car since new, it is 4 years old and I have personally driven 40000 miles in it without a hitch so I assumed it could wait till after the school summer holidays to be fixed so I didn't need to hang about for 2 hours with three kids in their garage service bay. Anyway I gave in this morning and took it in, and had a nice walk by the Clydeside while they were repairing it (will blog or flickr those photos later).
While chatting to the man this morning I happened to mention that Charlotte, in one of her scientific experimental periods had inserted a 1 Euro coin into the cd player 6 months ago 'to see if there was any music on it as it looked like a little cd' and funnily enough my cd player had stopped working instantaneously. So today while fixing my wheels they removed my cd player, stripped it down, took out the Euro and guess what - it works again and it only cost me £27 to have it fixed, or rather Charlotte will be receiving a £27 bill when I pick her up from school later. I hope that will teach her that it is sometimes better to ask than to experiment.
Posted by Phyl at 1:31 pm