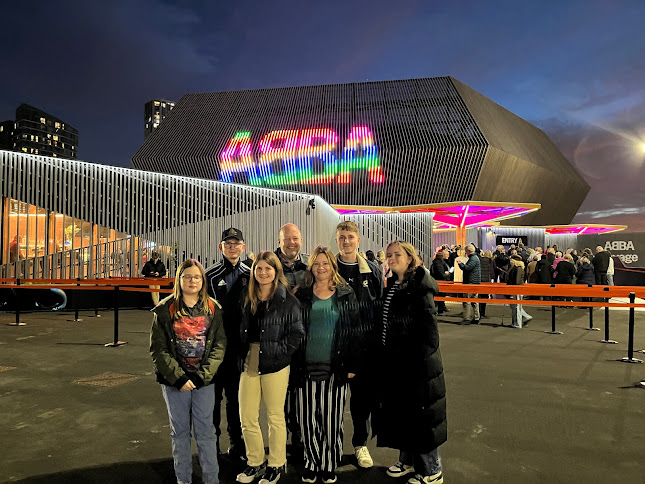 In October we went to London to visit Marcel and Milly (and their flatmate, Anton). It had been on our to-do list since they moved there at the beginning of Covid, but for the first year after the pandemic began the world was a bit mad. Denmark did so much better than the UK during the pandemic, the kids all visited me here rather than there whenever possible and I only ventured to the UK to visit mum, not London. The following summer I had a breast operation so couldn't fly until autumn when we needed to go see mum. And by that Xmas mum's quick illness and death meant everyone in the family meeting several times in Glasgow instead of London, once again.

This time last year ABBA had just announced their Voyage Abbatar concert. I knew Marcel lived there, so if I could get to whole family there, we could go. With this in mind I decided it was the obvious Xmas present for the eight of us. I spent ages toying with whether or not to buy mum a ticket for her Xmas too, given she liked ABBA and concerts and it was definitely going to be a show to remember. I put it in the bigger picture of a week in London. Obviously I would not hire a car on a city break, so it would have meant getting her to London, then many buses and tubes all around and probably an airbed at Marcel's. Eventually I concluded that it probably would be too much for someone who would be 78, so didn't get her a ticket. In the back of my mind, I was still tossing up whether to make a separate trip to Marcel's just with mum for maybe a weekend, especially as she had made an annual trip to see him in Edinburgh after he moved there in 2015. She loved being nosey about where he was living and taking him out for a couple of drinks in town and he loved the street cred afforded to him by taking his granny and her pal Joyce on a pub crawl once a year. Mum would have loved to see her first grandchild buy his first house.

When I booked those tickets the week before Xmas for October 2022, it didn't even cross my mind that she would be dead within two months and all my mental logistics about how to get her to London would be in vain.

So, last week was the concert. I definitely got a wee bit twitchy in the last few days in the run up to it. NOTHING was going to come between me and my trip to see ABBA. When I fell off my ladder a month ago I had decided I was going even if I was on crutches!

ABBA had come to Glasgow in 1979, hence the 'I was sick and tired of everything, when I called you last night from Glasgow' lyrics used in Super Trouper. I was 11 years old at the time and it was long before the Internet. To buy tickets, you had to phone the venue and book them. I was so terrified on missing out, that although I was a painfully shy, phone-phobic child, I rang up only to be told the tickets would not be on sale till the following week. When I rang back the following week, the concert was sold out and I collapsed in a heap on sobs and didn't stop crying for a month... in fact I didn't get over it till last Monday, at the age of 54!

On arrival last Monday, with my husband, my five kids, my daughter-in-law, her mother and her auntie, I was 11 years old again. All the hurt from November 1979 was finally laid to rest. In the queue to go in my darling boy bought me a T-shirt that I was too tight-fisted to buy myself. He sensed how to please his 11 year old mummy on the night! I guess if you work in London banking, concert merch is more affordable! In the foyer many, many people my age wandered around, often accompanied by friends or their kids... so many of the 11 year olds from the 70s. There were people dressed in well-known ABBA costumes, such as the blue and yellow cat T-shirts or the outfits used in the 1979 tour. There were people in 60s flower power dresses, there were sequins, sparkles, platform boots, bearded men in blonde Agnetha wigs, camp, loud, happy people hand in hand, all sorts of exuberance. It was just perfect!

The show was absolutely magical, the sound system perfection. They were so real I could believe I was finally there in the room listening to them sing to me and speak to me. Although we were in the seating rather than the dance floor, everyone was on their feet for the greatest of their hits singing and dancing along. I won't go into details about the content in case anyone is planning on going, but I will say that if you are an ABBA fan, you have to go, no ifs no buts, sell your house if you need to! And I was right, mum would have loved it.😢

I have now vowed to myself, though might not yet have mentioned it to the rest of the family, that I intend to go every time I visit Marcel and Milly. And if anyone is desperate to go but has no one to accompany them, gimme a shout! 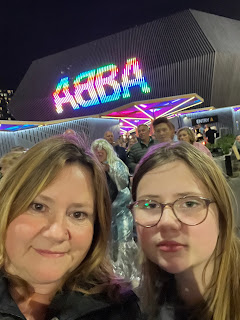