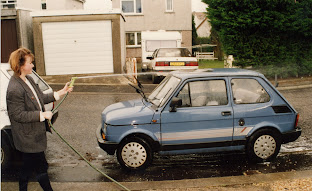 My first car was quite basic - this isn't a perspective thing, it really was that size! I think it is the only car I've ever owned with a roof I could actually wash without a stool or step ladder! It had no head rests and of course there were no electric windows... in fact I'm not 100% sure it even had heating. It was much loved but it definitely didn't have any mod cons. The worst bit was freezing your hands off spraying de-icer into the locks and attacking them with boiling water just to break in on numerous winter mornings. I still remember late nineties when I could finally afford a car you could beep open in the snow - bliss!
The other day I was taking Amaia to her viola lesson, she rushed to beat me to the key rack. Thereafter she bounced outside and stuck the key in the lock. When I asked why she wasn't just using the beeper, she replied that it is just so cool to be able to actually use a key to open the lock... I must be getting old. 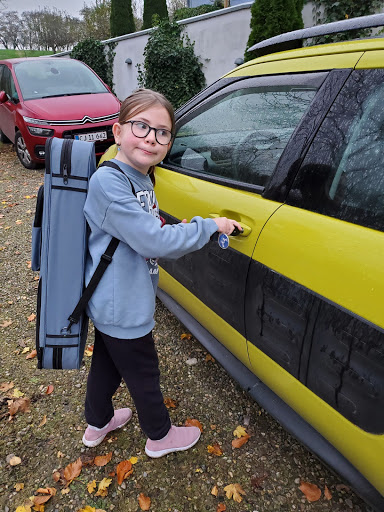 It reminds me of giving a friend's child a lift home from a school disco a couple of years ago. It was a stunning, hot evening. I had her and Amaia in the back of my 7-seater Chuggy. It had electric windows in the front but the old-fashioned winder ones in the back. (Her mother drives an expensive top-of-the-range 7-seater jeep-shaped Audi.) So she asked if I could open her window as she was too hot. Before I could answer, Amaia, leaned over and unwound the window... Wow, she said, that is just the coolest thing I ever saw. Our car just has electric windows, yours is so much fancier! As I dropped her off, she jumped out saying she was going to try to convince her folks to get a newer, trendier model, like mine! Bet that gave them a laugh!
Posted by Phyl at 9:51 pm