When we lived in Scotland, we always bought our Xmas tree from Ikea. For a £25 tree, you got a £20 voucher to spend in Ikea, and my family can easily spend £20 in Ikea so the tree became the great annual £5 bargain. And when you are married to someone who grew up in a Scandinavian pine forest, mentioning the words 'artificial tree,' as probably still is the norm in Scotland, is tantamount to asking for a divorce!😂

Last year was our first year in Scandinavia. We're surrounded by Xmas tree farms - we have at least three within walking distance, so we intended to get one there. But we're faffers and somehow we overshot the deadline and they'd run out by the time we got round to it. We ended up buying the last remaining tree in Aldi, but it cost less than a tenner and was actually the prettiest one we'd ever got! 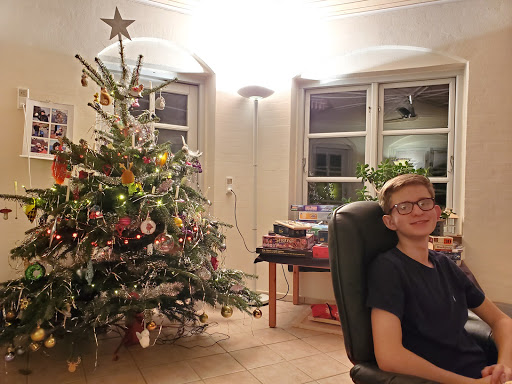 This year, thanks to Thomas's sister, we were much better organised. She visited a couple of weeks ago, having googled a chop down your own tree farm in the vicinity and we went over as a family and tried the trees out (Scandinavians take tree buying very seriously! 😂) before committing to the perfect one for her flat. She then played lumberjack, paid by mobile (it was a self-service Xmas tree field!), then strapped it to the roof of her car and drove it all the way back to Copenhagen!

So, after two weeks of nagging from the girls, we decided to go and chop our own one down on Saturday. We found a little place just behind Léon and Anna's school where they were selling any tree you wanted for 100kr (£12). We had a look about and settled on one that looked just about the right height.
The owner chainsawed it down for us but unfortunately didn't have a bagger as everyone here (except us) has a trailer, so Amaia had an interesting ride home. (You can just about make out her cream-coloured hat in amongst the branches to the left!) 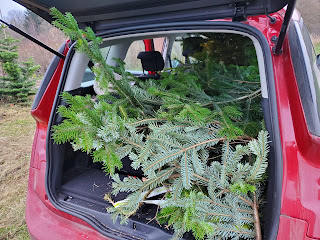 So this year's lesson for us rookie Scandy folk appears to be - a tree that looks very small in a big field turns out to be much, MUCH bigger once you get it into your house! It's taking up a third of the turret, and we've already sawed a bit off. And then there's the issue of the star. Thomas seems to think that this is an acceptable place for it as the top of the tree is touching the roof! All I can say is, it's just as well he's not married to my mother or Charlotte, because I don't think they'd put up with this solution!😂😂 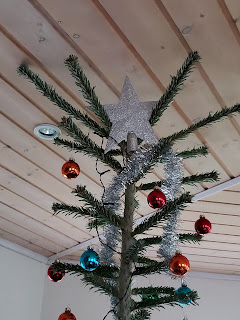