I know I am generally a little ray of sunshine in a grey world, trying always to see the positives whenever possible😂. I almost managed to believe that myself there for a minute. Ok, so I used to blog-rant a lot, but since moving abroad, because moving and starting afresh at my age is extremely hard, I have been trying to keep my spirits up by looking out for all things positive and ways of doing things we in Scotland could potentially learn from. But nothing is of course ever completely rosy and one thing I keep coming back to in my head is shopping. So it is time to get it off my chest...

I should probably have ranted this one last night when I came home from my shopping trip to give you the full force but it took all my effort to scrape my depressed self off the floor after shopping for my evening meal, so I had to wait till I calmed down or cheered up or whatever you want to call it... 😏

So, what's the problem? In a nutshell, Danish supermarkets are shit, no in fact, they are utter shit. I had almost managed to convince myself they were just bad but after a week in the Netherlands, I'm sorry to say they are diabolical, or even Diabolical with a capital D. And, this isn't just me saying so - even the Danish press agrees.

I am 15km from Denmark's 3rd biggest city, so this isn't a rural issue. In Newton Mearns I was also about this distance from the city centre. Between me and Odense there is actually no shortage of supermarkets. So, let's concentrate on a ten minute radius to contain my venom to a manageable size.

Within ten minutes drive of my house, off the top of my head I can think of three Dagli'Brugsen (that's your typical wee Coop like the one opposite my old house, to you and me - only with about 30% of the Scottish product range and overpriced). There is one SuperBrugsen (a triple-sized overpriced version of the usual Coops). There are two Aldis - we have Aldi Nord in Denmark not Aldi Süd as in the UK, Sourthern Germany or Italy (as I'm used to) - it is small, stale, hit and miss on the product front but at least has a better bakery than the Aldi Süd ones (see, I really am still trying positivity!) - again it is half the size of the Newton Mearns one. We have two Nettos - they are basically just about the same as the Aldis in Scotland for size, price and product type, but again the range is only about 50% of our Aldi in Newton Mearns. Then there is Rema 1000, which is more or less the same as Netto and Aldi - again there are two of those within a ten minute range. There is one Fakta. Fakta reminds me a bit of Shoppers' Paradise in the 80s - looks like it is about to go out of business and the sooner someone puts it out its misery the better. If I never set foot inside another Fakta as long as I live, I will be far from devastated. 😁Finally, we have two Menys - they are like wonderful high-class Norwegian delis... the closest thing from home would be Waitrose both for quality and pricing, but yes, they are lovely.

So let's count that up... I have 13 supermarkets within a 6km radius of my house. But, other than Meny, they are all the bloody same - they are all small Coop meets Home Bargains food aisle. There is no medium-sized ASDA/Sainsburys/Tesco equivalent. When my kid comes in from school and says they need wellies tomorrow for a trip, I can't begin to guess which, if any of the 13 will have them. You can't get basic non-food items that I'm used to picking up at ASDA and take for granted like a pack of pants or a woolly hat on a cold morning or a pair of kiddie trainers because someone has lost one at school. Your guess is as good as mine as to whether their current special is or isn't stationery, so if a kid needs a pencil or rubber for the next day, you have no idea where you might pick it up. Last night Léon was on cooking - he asked me to pick up burgers and mushrooms - even that was hard - I had to try three shops before I even found the simplest mushrooms. Aaaarg - seriously?

We do have one wonderful Bilka in Odense which has all these things (it's like a bigger version of Silverburn Tesco, so not for the faint-hearted or anyone over 70!), but it is in South East Odense (35 minutes from here) and I'm in North West Odense, of course! It is the only decent supermarket on the whole of Funen, where you know that whatever you want you can get on the spot - that's really is pretty poor for a population of 500 000 people.

Last week I was in Lidl in Alkmaar (there are three in Alkmaar alone). Even that felt like luxury after a few months here. The product range was so much better - loads of different types of mushrooms, chillis, you name it. And I could barely see one end from the other. 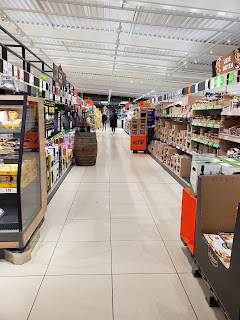 The bottom line is, I hate shopping. I've always hated shopping - whether that is for food, gifts, clothing, stationery, you name it - I want to rush in, pick it up and leave. I want to get it over with. I don't want, like last night, to have to visit three shops that were more or less the same because I need something as exotic as plain, ordinary mushies or some black pepper. It's the 21st century, ffs! I feel like I am back in the late 70s, grrrrr.

This isn't some sort of Scotland is better rant, I'm quite an international shopper - Scotland is better than Denmark on the everyday shop front, but so is the Netherlands, and Germany and France and Italy, to name but a few places where I often find myself in a supermarket. I'm beginning to think Danes are actually all so well off because they can't find anything to spend their decent salaries on - they've all crawled into a depressed hole for want of a choice of a chestnut mushroom or a scotch bonnet!

Come on Danes - you earn enough to buy nice things, so could someone stock them? Please! And you really don't need 13 indistinguishable shops all stocking the same crap within a stone's throw of each other!
Posted by Phyl at 1:16 pm