We had been planning to go to Scotland for the October week to catch up with family and friends, but Ryanair decided on a last minute price hike (they had of course sussed Scotland and Denmark had the same school holiday). Funnily enough £2000 for a set of flights that usually come in at less than £500, was a non-starter, but it left us with £500 to spend on petrol and an airbnb. We looked at a less than 8 hour drive radius from our house and then checked where we could meet Lots for the weekend so we still got the family catch-up and were left mainly with Amsterdam and Berlin. Flight times meant Amsterdam was the better option so we set off immediately they got home from school a week ago on Friday. Thomas was going to be working from home some of the week, but it still gave us all some scope for a real holiday, the first week away not visiting family since 2010! How excited were we?!

Traffic conditions when we left meant it should have taken just over seven hours. We set out at just after 3pm. It had been a lovely clear blue-sky morning but as we packed the car what looked like the tail end of a hurricane came in. We should have known when it took 3 and a half hours to reach the German border (which usually comes in at 80 minutes) that we weren't in for the best day. Anyway, this is the route google chose for us... 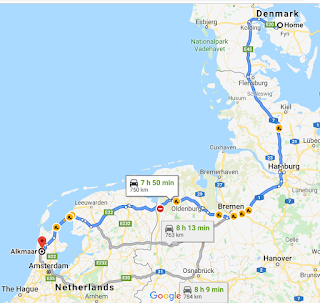 I drove the first chunk as Thomas was working from his laptop. Modern technology is amazing, isn't it?! When his work day was over, he took over and we continued to swap every couple of hours. After dark we reached this chunk, with me at the wheel. 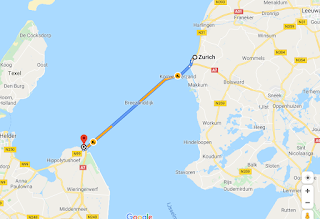 Now, I had never been to the Netherlands before in a car, I'd previously only flown into Amsterdam and my Dutch geography isn't the best so I was unaware of the afsluitdijk! As I drove over it, my right wheels were half-covered by water and I thought to myself - jeezo, this is quite a storm. The car was pulling to one side and the wipers couldn't deal with the spray (and a new seven-seater Citroën isn't exactly the scabbiest or lightest of vehicles!) Visibility was so dire I had to slow down to about 90 instead of the limit on that stretch of 130km/ph. Anyway, we survived and finally got to our destination in Alkmaar after 10 hours at 1am. Charlotte had given up on being picked up at Schiphol and found her own way to Alkmaar by train and bus and even found the spare airbnb key in a plant pot in the garden and let herself in!

On my way home a week later, I drove the afsluitdijk in the daylight! Bloody hell! What are those crazy Dutch people on? Turns out I had driven over a 40km chunk of road built in the middle of the sea in a bloody hurricane and managed to not die! Now that explains exactly how it felt! Howling winds from one side, waves going over the top of me... takes windswept to a whole new level. So glad I didn't know what it looked like when I drove it in the storm. Lol. Here's a photo from the return trip... 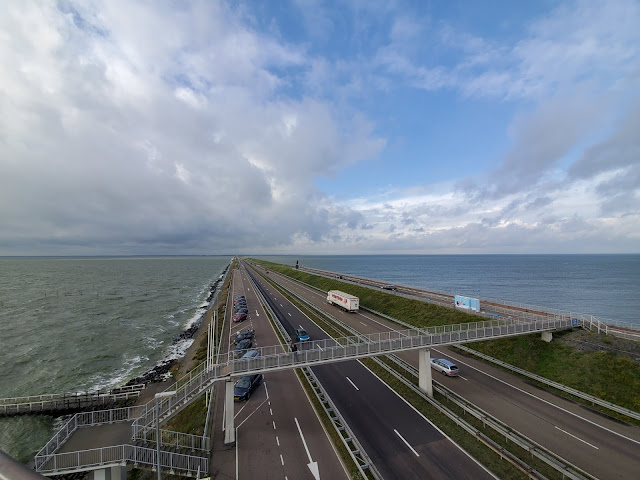 And a video of how it feels weather-wise even on a nice, bright and dry day!