Everything is Theresa May's fault! 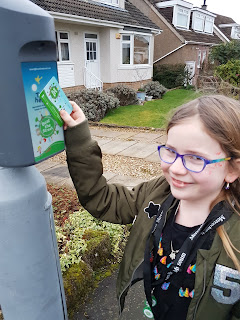 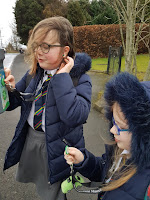 Newton Mearns and Barrhead are currently taking part in Beat the Street. From being reluctant to go on our daily walks, Anna has become a demon walker, organising outings with friends and even walking the more than two miles from school to our house. The unusually lovely spring temperatures are helping too, so since the whole thing began a couple of weeks ago she has now clocked up more than 30 miles on foot!

It is also great for community spirit. People are out with their maps and even talking to each other, especially in times of adversity... The nearest beat box to my house is actually across the road and up a lane from where it appears on the Beat the street map, so there's a great sense of camaraderie in my street, as people join forces to hunt it down!

Every morning we are now walking 2000 steps to school so we can beep three boxes. This morning as we reached the last one in the spring sunshine Amaia came out with the cutest comment: 'I hate Theresa May, she just ruins everything!' Now, I don't disagree with the sentiment there, but I was curious to find out what exactly she was referring to. She elaborated 'So many things are being ruined by Brexit. It could break up my family, I don't know if my daddy will still be allowed to stay or work here, or if I can still go and see Farmor and Großvater, it affects jobs and food and medicine and everything and it's even gonna wreck Beat the street!' That had me stumped. How exactly was the Maybot wrecking Beat the street? 'Well, it finishes on Brexit day too, so it must be because of Brexit!' The competition does indeed finish on Brexit day - quite astute of a 9 year old to be clued up enough to have noticed that - but this is actually because it is the last day of the current academic term in East Ren, rather than because Brexit! Brexit is not going to be banning us from walking. In fact, you could even find yourself having to walk much more, Amaia!
Posted by Phyl at 11:22 am