You can't get very far on this blog without noticing my somewhat irrational adoration of all things Fiat 500, or all things 'Chuggy', if you're in on the lingo... so when I refer to my Chuggy today as 'that Fiat', you know it has done something major to get into my bad books! 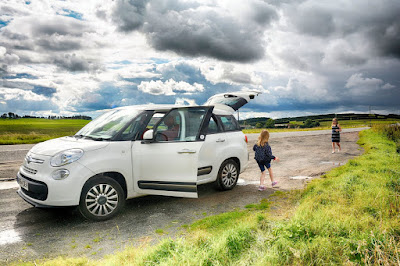 It started the first week in November as far as I am aware. I was in hospital so I don't know. One day on the school run, Thomas turned on the radio and the touchscreen froze on the Fiat symbol (the screen before you get the option to change radio station, jump to CD or any of the Bluetooth or phone settings.) He'd been listening to Radio Scotland the previous day so that was now the only option available.

That state of affairs lasted two weeks until he was at the garage anyway and asked the mechanic to take a look. He told him it needed a software update and said it'd cost about £50 to fix... a bit steep but nonetheless... The update didn't work (and he refused to pay for it!) It stayed frozen. The mechanic decided to unfreeze it, he could always pull the battery connection for a minute to reset it. He did and it didn't. The radio was still frozen and now, as all the settings go through that panel, the car reset itself to midnight on January 1 2000, with no way to override it. Into the bargain, as I couldn't confirm that, it was flashing on and off waiting for confirmation.

That must have been 28 days ago, as that Fiat is now insisting it is January 28 at some ungodly hour. 😡 So I have no CD player, no Bluetooth, no phone, a flashing dash and I'm stuck on radio Scotland. Things can't get any worse, or so I thought...

Last week I was driving the kids to Braehead when the radio suddenly switched itself on. Exactly three minutes later, it switched itself off. It went on to do this a further seventeen times between Nitshill and Braehead. This was annoying to say the least and also startled me each and every time.

Surely things were now as bad as they could get?

On my next outing into town, it decided I wanted to listen to Thomas's Christmas CD - a mix of Danish, German and Spanish carols - a bit incongruous after Christmas, but why not? I had missed a month of driving this Christmas season so wasn't completely Christmas-musicked-out, for once. However, the switching on and off had tripled so I decided to combat it by turning off the volume. Mummy 1 - that Fiat 0! Until it reset the volume each and every time it turned it back on - bastard Fiat!

Surely things were now as bad as they could get?

On Sunday I drove Charlotte and mum to Braehead to have their iPhone batteries updated. It played silly buggers all the way over and the volume button was no longer working so I couldn't shut it up at all. I parked and turned off the engine... the music continued. I took out the keys... the music continued. I locked the car and put my ear to the window... to my dismay, this is what I could hear.

Bastard Fiat! I needed some shopping in IKEA but was forced to sprint round the aisles in case the stupid thing ran my battery down to zero in the meantime. I would have expected better behaviour from my Chuggy. It was obviously possessed by some demonic radio system and needed exorcising immediately!

I made one stop on my way home at Aldi to buy dinner and we hit the final straw. The touchscreen that had been frozen on this picture for six weeks, suddenly went white, wavy black lines appeared and it started screaming, at full volume, some hideous noise that reminded me of the sound you used to hear when you loaded a program into a ZX Spectrum from a tape deck in the 80s! And the bloody keys were in my pocket at the time! I'm literally at the stage where earplugs are becoming a necessity to drive.

So on Hogmanay I rang my local Fiat dealer and explained the whole saga. They said they could have a look at that for me, no problem. They charge a standard £100 to diagnose the fault and if I need a new radio because their software fault has crippled it, it'll be £600!!! FFS, I've owned cars that I paid less for than that. You've got to be having a laugh! Needless to say, I'll be having Halfords fit me a new bog-standard radio as soon as they reopen and my local Fiat dealership can stick their diagnostics where the sun doesn't shine.

Hopefully by this time next week my Chuggy will be back to its usual self, and no longer possessed by demons.