Léon is a mix of two kids - 85% of the time he is enthusiastic and exuberant, wandering from room to room whistling the latest concerto or ceilidh music he has been practising for his orchestra or folk group. He hums, he sings, he keeps the beat of some tune only he can hear in his head. He twitches and taps and never sits still. Music is everything. When he's not being musical, he spends hours googling what he refers to as 'fun facts' and comes out with the most incredible general knowledge any of my kids has ever mastered. I often find myself wondering what on earth he googled in the first place to learn the information on every subject under the sun. He sucks it all up like an oversized sponge. He's bouncy like a puppy, never walking but skipping everywhere. Where this approach was cute in our small house when he measured 1m25, it is a tad annoying now he's 1m70+ and lanky as a bean pole. The other 15% of the time he's 'gammoning' about some minor annoyance that no one else would have noticed but once he's got hold of that stick it's hard to fight it away from him.

Charlotte is the opposite of Léon. She's a quiet and passive sloth-like creature, never making a sound. Occasionally you hear her singing along to something in Spanish in the kitchen while cooking but only when she's alone and if you enter, she quickly falls silent. Charlotte sits still on the couch, earpods in, or just silent. She moves slowly and never bounces. She comes out with cutting, sarcastic remarks about Léon's nerdiness. Léon's music is often met with stares, huffs and calls for him to fall silent, until exasperated when he's forgotten for the third time in less than two minutes that she's asked him to stop whistling, she loses her temper and shouts at him to shut up!

Don't get me wrong - the two are inseparable and they adore each other. He was her first baby after all, but on a noise level, they are opposite ends of the spectrum. 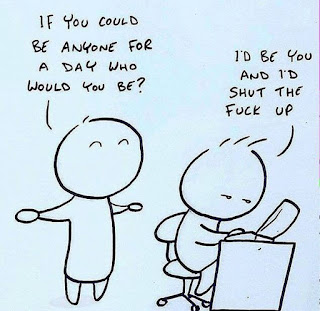 So, when I saw this yesterday on Facebook and it made me laugh out loud... Definitely think it was written with them in mind!

When I forwarded it to Charlotte who was on the bus into town, she also laughed out loud, as did Léon when I showed him it after school.
Posted by Phyl at 3:59 pm