The youth of today

Charlotte was talking about uni this morning on the school run. Maybe I should start calling it the educational establishment run now she's left school but the others haven't... (I have to drop her at Mearns road to catch the No.4 bus to Glasgow uni as First have stopped its coming to Harvie avenue - it's not like anyone needs a bus from half of Newton Mearns that goes to Glasgow uni, is it?! Grrrr) 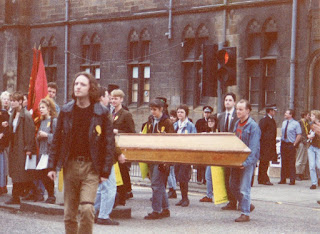 So, she was saying something about having a lecture in the McIntyre building and I commented that the John Smith bookshop was in there when I was a student so we had never used it for classes.

I then remembered it was where you went for NUS meetings and all our protest marches had set out from there. I then fondly told her of our great protests - the RIP free education marches of '86 and '89 when student grants were scrapped in favour of loans and where we'd carried a coffin from the McIntyre down to town picking up the Glasgow School of Art, Glasgow Tech and Strathclyde uni students en route before holding a rally in George square and marching out to Queens Park.

I told her about the Mandela protests and our small part in the fight to overthrow the Apartheid regime in South Africa during my student days and our campaign to make Winnie Mandela rector and give Mandela the freedom of the city of Glasgow, then I explained Apartheid to the three wee ones as I drove. Charlotte was listening quite intently, then came out with a comment that blew me away...

'But that was before social media! You did all that and the only people who saw you were doing it were the ones you actually marched past? How did you motivate people to protest if you couldn't get your message out to the wider public?' I explained that it would have made it into the papers or on to the BBC back then and everyone would have known. She found it hard to imagine mainstream media actually reporting anti-establishment news. Her generation assumes that if you protest you need to livestream it on Twitter or Facebook as it won't show up in the newspapers or the TV news. Interesting, if a tad Orwellian.
Posted by Phyl at 11:33 am