It's a bit of stressful time at the moment. 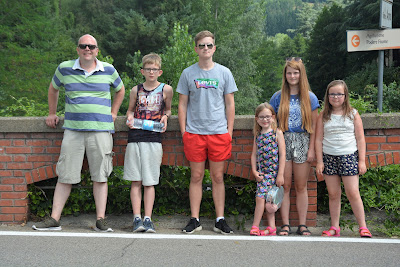 First there's Marcel - my number one and usually very capable child. At 21, he's been living in Edinburgh for over three years. This summer, however, he managed to get himself not one but two jobs and his eight hours a day, seven days a week have resulted in him having run out of time on the flat-hunting front. Instead of lining up his next flat which he needed to get from Sept 1, he left that to his slightly more laid-back flatmate, who has enough money for hotels and who also has a girlfriend round the corner. Marcel has now moved back home and is booking flat viewings by the dozen from across the country at ten a week while shouting expletives, punching the air and muttering under his breath about never leaving a job to someone else if you can do it yourself. Of course, he's also having to commute to Edinburgh three days a week for his Apple job and uni starts next Monday! He's contemplating sleeping in the library from then!

Then there's number two. She's no longer stressing me but I couldn't say the same last weekend: I got a text from Spain saying the single mum she had been au pairing for had decided to give her ex husband the kids three days early and had disappeared off to visit her new boyfriend three hundred miles away, leaving Charlotte homeless, but I wasn't to worry because she'd moved in with the mum's (single, forty year old, lives alone) brother and they were having a lovely time getting to know each other over wine!!!! Do you trust him? I asked in the calmest of voices, trying not to shriek or squeak! Turned out he was a lovely guy who paid for her food, lent her his travel cards and drew her maps to the beach and tourist sites of Valencia, worked on a work presentation all weekend, and waved her off on the tube to the airport on Monday morning but that doesn't mean I slept a wink till she got off the plane on Monday afternoon!

Number three is usually happy to have his brother home, probably because he only comes during holidays and they sit and watch movies or play play station together, but this time he's gammoning away: Marcel is taking over my room with his bags, and I can't sit on my spare bed to get dressed in the morning because Marcel is asleep in it, and I have to get dressed in the dark because he isn't up yet and when are you going to convert the spare bathroom into a guestroom like you've always said  you would mum, so I can get my room back NOW!!!

Number four isn't overly annoyed though First's decision to terminate the number 4 (ie Glasgow uni) bus at ASDA now means that school run has been moved to ten minutes earlier to let Charlotte jump out at Mearns Castle where she can catch the bus to uni and this is worth a rant or two in the morning.

Number five is still in full packed lunch meltdown. Apparently packed lunches are worse than smallpox and syphilis rolled into one and if I just whine another week, maybe they'll give in and start buying me school lunches again! (Maybe I should take up lotto to see if I can win a year's subscription to canteen lunches at Kirkhill primary)

Reminds me a bit of my first (German) mother-in-law - she also had five kids and used to say to me: Kleine Kinder, kleine Sorgen, große Kinder... I was meant to fill in the blanks myself, I think I get it now!

Number six, aka my dearly beloved, has manged to do all sort of damage to himself over the weekend. He slipped on the wet kitchen floor at 1am on Saturday morning and it was after two before the adrenaline shakes had worn off enough for me to get him into bed. Saturday morning I was up again before nine and got Charlotte to take 3, 4, and 5 to their Williamwood music lessons while I got six x-rayed: nothing broken - just a twisted knee and a strained Achilles tendon. Now, he would probably deserve sympathy if he'd been running a marathon but given he slipped on an ice cube he was putting in his white wine because he hadn't chilled the bottle enough, I'm not so sure!😂

Even the hamster has been so awol this weekend, I was beginning to wonder if she'd kicked the bucket until I heard her drinking this morning.

I'm fine... well as fine as someone can be this close to the Tory party conference announcing whether or not my husband is an illegal alien who needs to be booted back to where he came from.

I'm seriously considering remortgaging the house before the pound collapses anyway and pissing off to somewhere Mediterranean for the October week where I can recharge my batteries in the sun far from all the madness, only question is whether to go alone or take this bunch with me!