At the ripe old age of fifty, I wonder if I have finally got slightly too old for tent camping. I don't think the person who invented double air mattresses had fifty somethings (or forty somethings, in the case of my dearly beloved) in mind! In some fantasy world, where I actually have enough money, I often think it would be nice to have a camper van. I've never fancied a caravan, not since my dad's pal managed to coup his on the way down the Ayrshire coast when I was a teenage new driver, but a camper van would be steady to drive, be weatherproof and you could have a decent bed and even a wee toilet. The problem that always strikes me though, when I'm mulling this option over (other than the lack of money in my bank account for a spare car!), is that we often go to Italy, where the streets of the old towns are narrow. Sometimes I struggle to squeeze my rented Fiat 500 down them, so a camper van would be a non-starter. The same can be said of many of Scotland's more remote single-track roads with passing places, so holiday weekends would be out too. If only there was some way to drive a camper van on holiday but also have a car ready and waiting when you arrived...

Silly I know... and then we went camping in Drumnadrochit! There were many camper vans around the field where we had our tent. They all looked the same but one caught my eye. The van had a Dutch number plate but was flying a Croatian flag, and contained a couple who spent all their time in Croatian football strips watching the world cup on a tablet... intriguing. It caught my eye because unlike all the other camper vans they had actually brought their car too, and what a cute little thing it was! Older than the ark, I wondered how they'd actually trusted it to get from Zagreb/Amsterdam to the north of Scotland, but still I had to get a photo. You see it was a saloon Chuggy, except it wasn't... maybe it was some iron curtain Chuggy clone from the 50s or 60s, I don't know but isn't it cute? 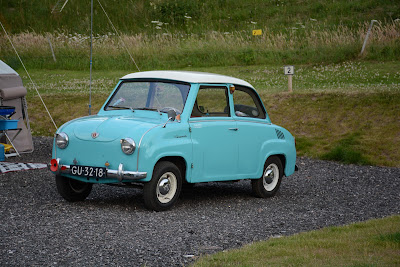 And as for their wee camper van - it seemed perfect when you looked in - bedroom, kitchen, loo, exactly what you needed! For the whole three days it was there, I kept passing the little Chuggy clone and smiling to myself that they'd had the balls to bring it this far. During the day they went out on the small roads in it, and at night they cooked and slept in their van. I did think that as there were only two of them, it must have been very lonely trip up to Scotland in tandem, all the same.

On the last day, we all had to be out by midday. As we were taking down our tent, I noticed they were taking down their flag pole! That's when I caught sight of the little sliver of turquoise barely visible inside! OMG. How cool is that?! 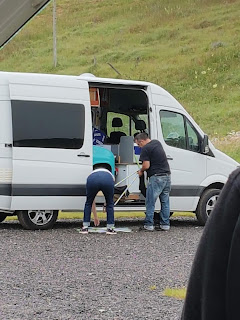 Somehow everything that had been on the floor of their van had been pulled up to the ceiling, freeing up the space to pack the wee Chuggy thing as it was small enough to fit in!!!

Now, that has really got me to thinking. We'd need a tiny car that fits in a camper van. I'm thinking something like this that they are selling on ebay today would work. What do you reckon?! 😜 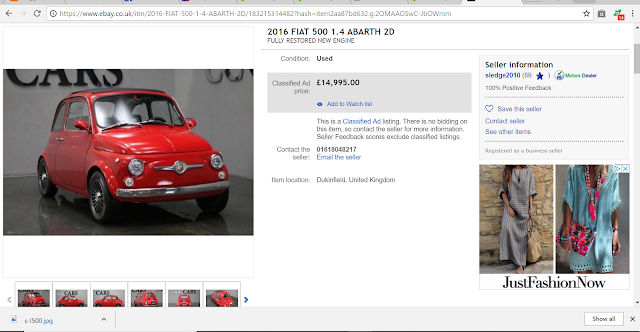