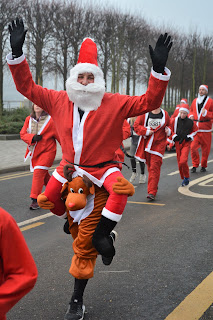 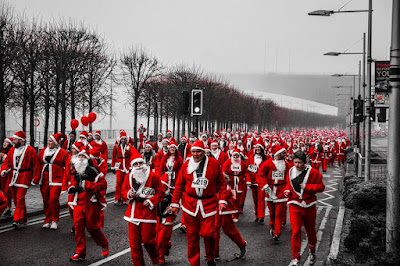 Glasgow holds an annual 'Santa Dash' every December. It's on a Sunday morning at 10am - and it isn't just any Sunday, it's the coldest darkest Sunday of the year. Sunday is the only day we can have a lie-in because of school and violin. Every year I suggest going along (not even necessarily running or walking it, even spectating, and every year everyone in the family just looks at me as if I've asked them to poke rusty nails in their eyes! I'm sure my daddy would have come along with his camera if he'd still been here - he liked mornings and photo shoots.

Anyway, last Saturday as always I came out with my nonchalant 'Santa Dash is on tomorrow morning, we'd need to get up at 9. Who wants to come?' Thomas already had his get-out - he's been in bed on steroids and antibiotics for a week now with a bad chest infection, Marcel was home for the weekend but claimed a dissertation that happens to be part of his final degree was more important, Charlotte didn't even bother to reply, she just rolled her eyes, the girls said they'd rather sleep... Then suddenly Léon volunteered! He has a broken arm at the moment so instead of sleeping long as he usually does on Sundays, the pain has been wakening him up so he figured he might as well come along!

I got up, my phone read -7 degrees, I opened the curtains and saw nothing - freezing fog so thick I couldn't see the garden bench. Léon came down, at that point the girls came down too, having had a change of heart so the four of us went in and watched 8000 Santas, half a dozen elves, snowmen and reindeer braving the Glasgow weather for a good cause. And it looks like next year I may have to come again, as they've all asked to take part next time. 😀 Maybe then the fog will be less thick so you'll be able to see more of the Santas stretching into the distance!

And here are the photos to prove what fun it was!
Posted by Phyl at 6:07 pm