Thomas has been reading his grandfather's memoirs again and was lamenting the fact that he didn't make much mention of his many siblings or their personalities. Maybe that was in case they happened upon them, as they were all alive at the point he was writing them. That got us on to discussing what might be of interest to descendants, were we to write about our own lives.

Thomas was saying it would be interesting to tell people about how fashions have changed over our lifetimes. An obvious example, he cited, was ties. When he moved to Scotland, he was expected to wear a tie to work, a few years later he was expected to keep one in his desk in case of outside visitors but in general management went without, and now they don't expect anyone to wear ties in any of his workplaces, no matter the meeting.

I thought from a Scottish perspective, I could mention the evolution of the school uniform. When I was a child, skirts were compulsory in my area. Come rain, shine or snow, nothing allowed a girl to don a pair of trousers. I remember the year our school heating system broke down (winter of '79 or '80), wearing skinny jeans (leggings hadn't been invented yet), with a slightly-too-long skirt and long woolly hockey socks on top, so no one would discover I was breaking school rules. My legs were a lumpy mess but I was deliciously warm for the first time at high school! Fortunately, when the first immigrant girls arrived from Pakistan, they fought the trouser rule on religious grounds, the school gave in and then found they couldn't allow trousers only on religious grounds, so trousers became an option. It was after I'd left, but at least I knew my daughters wouldn't be hiding jeans under socks at some future date.

The item of dress, however, that would probably shock my offspring the most was 'navy blue gym pants'! This was a compulsory item of clothing. Everyone wore blue pants to school every day (unless you could actually remember when you had PE lessons) because PE forced you to strip to your pants. Given all the underage '70s sex scandals that have been coming out in the press over the last few years, you have to wonder who ever thought it was a good idea for all girls aged 4-12 to prance about in these and a t-shirt as they vaulted over horses and climbed wall bars - it must have been a paedophile paradise! Boys, as far as I remember, wore shorts, only girls were forced to do PE in underwear! Given that many girls start their period before leaving primary, it is quite shocking to think back on. I certainly never particularly liked the big, scratchy blue pants and I'm thrilled my own daughters now get to wear shorts. 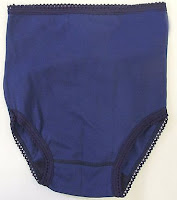