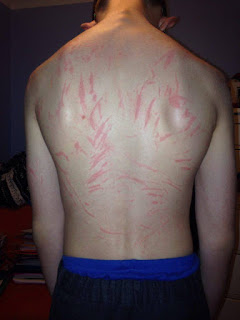 Léon has always had mild allergies. He doesn't even need to touch himself to end up looking like this, he simply needs to swim a couple of lengths of a chlorinated pool. He dives in looking fine and when he emerges at the other end the life guard tends to look somewhat alarmed - are there perhaps sharks in there, that I've somehow overlooked? Giving his back a gentle rub tends to result in 6-10 hours of this attractive look. There's hay fever too and blue food colouring used to bring him out in eczema. We, of course, had him allergy tested at hospital for all the usual culprits - grass, milk, egg, nuts, sea food etc - all showed a very mild reaction, nothing bad enough that he should avoid it, nothing good enough that he can stray too far from the cetirazine. It's odd though - he has good months, then bad but the one thing that is always bad is the skin thing - diagnosed when he was little as dermatographic urticaria.

Although it looks sore and itchy, Léon claims it doesn't actually bother him - it's apparently neither sore nor itchy despite the dramatic look. He told me recently he has been known to play knots and crosses on his arm with school friends when bored in assemblies (but only when he gets a seat at the back)!

With Charlotte half way through her Highers, it suddenly occurred to the wee bugger last week - hey, when I'm Charlotte's age I could write all the Maths formulas or English quotes on my skin with my nail and they would fade away by the time I come out the exam! I don't think so, pet! He even gave me this demo! 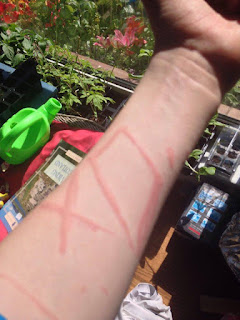