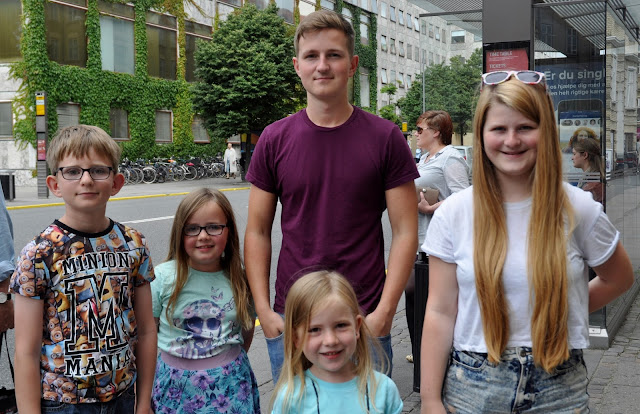 When I had my first child in the summer of 1997, I didn't own a mobile phone. I went back to work full-time after the 29 weeks you were allowed back then and unless I was at my office desk, there was no way for nursery to contact me. When I had Lots in January 2000, I went back again when she was 29 weeks. Having two kids to pick up and having a fairly old car, I decided to invest in a Motorola Timeport L7089 in case the car ever broke down. I actually left the phone in the glove compartment of the car at all times as it was my 'break-down emergency phone'! So again the nursery could have burned down while I was in a meeting and I wouldn't have found out till I turned up at six! There were no smart phones, there was no Whataspp, nothing.

Back in 2009, when Marcel's p7 class went for their residential week to Castle Toward, we waved them off and five days later went back for them. They were tired, dirty, exhilarated and full of news. We had no idea they'd arrived safely and no idea they'd survived the rafting - other, of course, than the lack of bulletin on the six o'clock news. When they went on school day trips, we heard nothing and saw no photos. In the summer before Marcel's last year at school, he disappeared off to India for 17 days. They flew through Dubai to New Delhi then took a twelve hour bus trip to the jungle at the foot of the Himalayas (where tigers roam freely!) I have to admit I didn't sleep as well as usual those 2.5 weeks but it did prepare me a little further for him moving out, living in another city and me going sometimes four or five days without hearing a word from him. Kids don't really use Facebook so I can't sit looking for activity there - I don't think he posts more than a status every couple of years. The main thing is slowly from day trips, to weekend trips, to week trips to months away, I was weaned off my natural helicoptering instinct.

It's easier with subsequent children. You have been through that trip before so worry a little less with each passing child. But I think schools are going in the wrong direction. Now with social media, I see parents struggling to get through a day trip to the Science Centre without confirmation of arrival and a few happy photos. Scout camp photos are sent to us on arrival. Just yesterday the school felt it necessary to email us they had arrived safely and again this morning to say they had slept well and were happy. Yes, it feels great to know that, but it doesn't prepare us for reality. The reality that one day very soon you'll drop your kid at student halls in some far away city, then drive home to no update on whether they found their way to campus, or whether they ate last night, maybe they got drunk and staggered home in the dark streets of a town they don't yet know, maybe they fell asleep on a couch belonging to a friend of a friend - you will have no idea. It's 4 am and you are lying awake - are they in bed or out clubbing? I don't think we're doing ourselves any favours by hovering above them longer because those emails aren't for the kids' benefit, they are for ours and if we can't let go, they can't grow.

It's getting through that first day when your seven year old is in Glasgow that one day helps you get through that year your kid is in Edinburgh ten years later. It would be good if we could try to forego the fixes, however lovely and reassuring they are, for our own sakes more than theirs. I guess the alternative (which I actually know some parents use) is to install tracking software on your child's phone but honestly there are some things I really don't need to know about my kids. If they want to spend a night with a girlfriend or boyfriend, do I really want to be tracking them? I had a friend who once took out his iphone and announced to me, pointing: look, my wife is currently getting petrol in the Ayr road and my son is in town at the cinema. Life's too short to spend staring at dots moving about on a map. If we parent well enough, we give them the skills to get on and then we can trust them to make the right decisions, tracker off!

(I do still reserve the right, however, not to sleep a wink while Charlotte is in Nicaragua for most of this June! They are making her climb a live volcano - aaaaaaaaaaargh!)
Posted by Phyl at 12:27 pm