Life on the roller coaster part 2: It's only a couch... 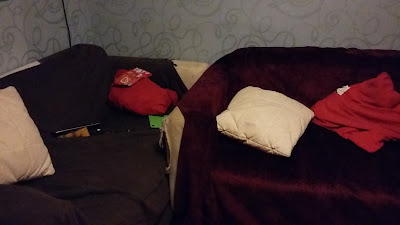 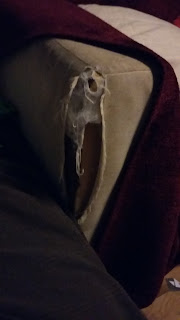 I was discussing the level of uncertainty facing mixed EU couples yesterday with my MP (and friend) Kirsten Oswald. She was asking me to describe how it is to be in a situation (ongoing for the last seven months and given every indication coming out of Westminster, continuing to be ongoing indefinitely or at least until 2019).

You don't actually know if your husband will be allowed to stay in the country after 2019, or simply if he'll continue to get the same standard of living afterwards. You don't know if you'll be able to follow him if he's sent away as your right to travel will be revoked at the same time as his.

Even if they let me travel, what becomes of the oldest of my three youngest children at Brexit point? The two oldest are over 18 in 2019 so can decided themselves, as dual citizens of UK and France, where to live, the two youngest can go or stay as they too are dual citizens of UK and Denmark, but what of the child of my first marriage who will be 14 at that point. Yes, he too is a dual national so can leave on his French passport, but until he's 18, only his French father can get him a French passport and needs to sign documentation allowing him to leave. I have no contact with him and he hasn't seen his father since 2012. If I had to bet my mortgage on him helping us out if I was to track him down, I'd bet he'd refuse to help us. Some divorces are sadly like that. So do I get to wait home with him till he turns 18 while the others all live abroad? (Not in this home of course because I can't pay for that alone...)That's fairly stressful as situations go, isn't it?

I worry too what will happen to my two student children in 2019. If I actually get to leave and they are part way through their course, are the still UK citizens as over 18s who always lived here or will they suddenly be charged the full £16K a year because mum moved abroad? No one seems to know. These questions are huge and because it hasn't happened before, no one can answer them. You're just supposed to get on with life as usual as if nothing is happening.

Thomas talks about applying for the right to remain but my gut feeling is why would you beg and grovel to stay a place that doesn't want you and where your children will be cut off from the rest of the continent where people potentially celebrate differences better...

I, then, as a light note and to add some humour to our chat, mentioned to Kirsten that my TV room couch was a bin case! It's so insignificant on the scale of things that are worrying me, but look at it! The TV room is a little den, if you like, not a living room and as such a normal three piece suite doesn't fit. Ikea sells a corner couch (Friheten - ironically in this case means Freedom in Swedish! (something I feel we have all too little of at the moment)).

This would be a perfect replacement for that mess we're sitting on. It's legs are loose so it wobbles. It looks like the cat's got it (except we don't have a cat). But we're not buying it. Spending £400 on something that fits a room in our current house seems meaningless at the moment as we don't know how long we'll be allowed to stay here. We don't know how far we'll have to take all our furniture and we don't know when £400 might become a matter of life and death. That is the reality of what's happened to us and the three million other families like us in the UK at the moment. It's funny that the big questions could overwhelm but somehow it was the simple, matter-of-fact way that I mentioned we wouldn't be buying a new couch that really brought it home to her, how precarious this situation feels (and I didn't even show her this picture!). Sometimes the small things can be larger than the big ones.