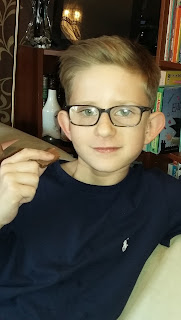 I feel these days like we're just clinging on the last seconds of childhood with Léon.

First it was his distinct lack of interest in play parks last year. He's stopped playing with all the younger kids in the street who always used to come in for him, usually claiming he's busy with some household chore. Of course, he's also grown to almost my height in the last year and has moved up four shoe sizes since Easter.

Then he and some school friends made a 'band' because it is ok to hang out with girls and talk to them on Skype as long as you have the excuse that it is because you're all in the one band.

Last week Marcel dropped by for dinner. He asked Léon if he'd like a designer t-shirt he'd grown out of. It was a size S adult, so there I was ready to put it in the loft (in a bag marked boys' clothes ages 14) when he put it on and it fits fine - arg! Mind you, I now think he might need more than one, given he's been wearing it three days solid, as he's so pleased to be in something his cool big brother recommended! I doubt there will be any further use for t-shirts with cute dinosaurs or skeletons now he's discovered plain teenager ones.

But I think yesterday was the real eye opener. He asked to go to the hairdresser... alone! And came back looking like this. It's not a huge change but I can definitely see where he's trying to go.

It is very sweet to see who his role model obviously is! 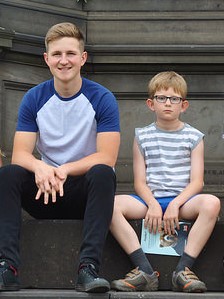