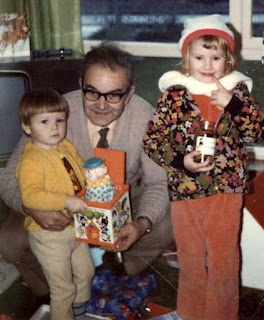 I can't have been a very confident child. I was never brave enough to ask my grandparents to explain half of their Scottishisms when I was a small child so constantly sat puzzling over what they were on about, as I mentioned recently.

Another amusing misunderstanding was my Gramps's name for my brother. I'd say up for 90% of the time when we were little Gramps called Derek Henson. Obviously the other 10%, he actually called him Derek.This confused me. You see, Derek's middle name is Henderson (my Granny's family name). So, what went through my eight-year-old brain was something along the lines of - Isn't it odd  a) that Gramps calls my brother by his middle name? (I don't have a middle name, so had no precedent to compare this to) b) that my Gramps gets his middle name wrong when it is after his own wife? I think I was about twelve before it suddenly dawned on me. Being a wee Glasgow man, he called me hen. Being a wee Glasgow man he called Derek son, but through habit came out with hen first (I had been around for three and a half years before Derek showed up so he was more used to addressing a grandchild as hen than son) then corrected his own mistake. So he wasn't calling Derek Henson, he was calling him hen...emm... son! D'oh!
Posted by Phyl at 1:39 am