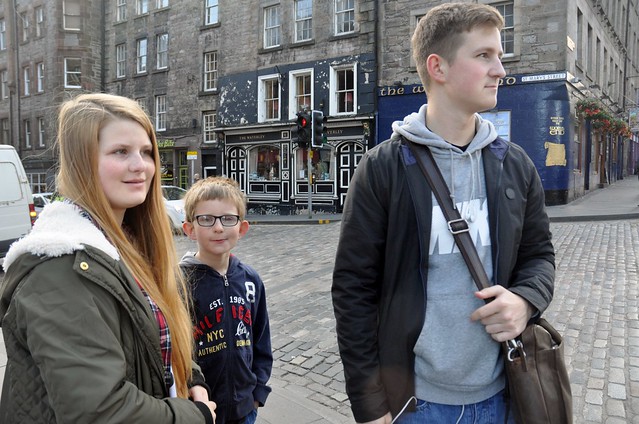 I remember the first time I moved away from home and from Glasgow for any significant time, that is to say for a stay of more than a couple of months. I was 19 and I moved to France at the end of August of 1987. For the first few weeks I stayed with my then boyfriend (now ex-husband) in Besançon, then I went on to a teacher training course in Nancy and finally I moved to Bruyères in the Vosges around the second week of September. Bruyères was to be my home for the next ten months. I knew no one and no one I knew lived within about three hours of where I was. I met my German flatmate a couple of days later and she was in the same position. We were to become close, simply because we were the only two strangers in that very close-knit town.

For the first few weeks, I wondered what I had done. There I was in a town of 4000 inhabitants in the middle of nowhere. The kids I was teaching had little interest in learning English. The boys wanted to grow up to work for the forestry commission. The girls wanted to have kids and bake cakes as their mothers did. I felt at the same time that  I had landed on the moon, and gone back in time by about a generation! I couldn't begin to imagine I would ever feel at home in a tiny village after a lifetime twenty minutes from Scotland's largest city. If my degree hadn't depended on it, I'm not 100% sure I'd have returned after Christmas but when I did, something had changed. I suddenly started to feel at home. I began to appreciate the slower pace of life. I liked the loss of my anonymity. When I returned to France, I liked the fact that the woman in the Post Office asked if I'd enjoyed my trip back home. I liked the kids waving to me as they drove by. I had become part of a community. And when I drove out of that town for the last time the following June, it was blinded by tears and with a crowd waving me off. Slowly that had become home and Scotland had become abroad.

Marcel acted very bravely when he left home. He's only eighteen and although he's fairly mature and worldly wise for his age, he looked a little out of his depth as he opened the door to his student room for the first time. After a month, he'd grown up enough to admit to Thomas, who was through in Edinburgh for a meeting so had taken him for a pizza, that the first few weeks had been terrifying. Worse than back in my day when we had communicated through snail mail, he'd spent his first few weeks watching his large group of friends from Glasgow, none of whom had had the balls to make the jump, still socializing together as he sat in a strange city alone. He wondered what on earth he'd done. And of course, given he got into Glasgow uni too but turned it down, he definitely had a feeling of 'if only'.

Fast forward to last Friday. He turned up here as he'd been invited to a party. He seemed lighter and happier. He's grown greatly in the last ten weeks. I asked how he was and he explained that this was the first time he'd come home and realized home was away and away was home. He went on to clarify that when he left Edinburgh he'd said goodbye to his flatmates and the caretaker in his building because he knows them well. At the bus stop into Edinburgh he'd spoken to a little old lady who is often at his bus stop, he'd greeted the bus driver who he also knew and had spoken to the Polish lady in the coffee shop who serves him when he passes, but on arrival in Glasgow he became anonymous. The bus drivers, the shop owners, the people at the bus stops were strangers. So although he knew the city well, he felt more at home in Edinburgh than Glasgow.

Although that brings a secret tear to my eye, it makes me immensely happy at the same time. He now has the tools to go anywhere and do anything he wants, whether that is on the other side of the world, or one day back here, only time will tell.