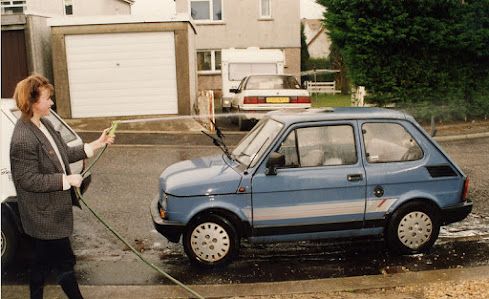 With Marcel reaching 17 this summer, he's started talking about saving up for driving lessons, a car and insurance. Many of his better-off friends will be given a car but rather than being down in the dumps at that prospect, Marcel just sees that as another challenge. And obviously given he's just worked enough in the corner shop to pay for a trip to India and a few other outings this summer, that possibility isn't as far-fetched as it could be (well if you ignore the potential insurance quotes anyway!)

So we got onto the topic of first cars. Somehow Marcel had managed to miss all references to my first car over the years so I hunted through some old photos till I found one of it. It was a 1988 Fiat 126. He looked surprised that something that small could actually get you anywhere. When I pointed out that Linda, Gillian, Shona, Sheina and I had been on many day trips to the coast and the likes in that little chuggy, he nearly fell off his seat in surprise.

I have fond memories of a trip to Edinburgh once: I had noticed in the handbook that its top speed was 68mph so with a tailwind on the M8 we'd tried our hardest to break the 70mph barrier - ambitions were small back then!

There was the time I had taken it to Mull on holiday with my then French boyfriend. We'd phoned ahead and booked into a bed and breakfast calling ourselves Miss De Beauvoir and Mr Sartre and they hadn't seemed to get the allusion! We drove onto the ferry, or rather we tried to but the chuggy got stuck as it was too little to drive on. Four men had had to carry it on rather than leaving it wobbling on the on-ramp - how embarrassing!

And finally in the early years in Collins, a German colleague asked me for a lift into town as his car had broken down. I'm not sure he'd have asked, if he'd seen what I drove. He was about 6'8" and I had serious trouble getting him in and out. I thought at one point I might have to drive with the sunroof open! 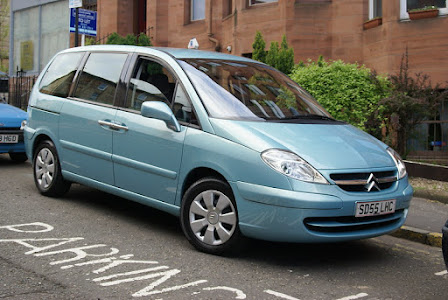 These days I may be seen more often than not in my big seven-seater people carrier, but to be honest I will always be a chuggy owner at heart. One day, when all the kids have left home, the economy permitting, I'm going to buy myself a new Fiat 500!
Posted by Phyl at 3:37 pm