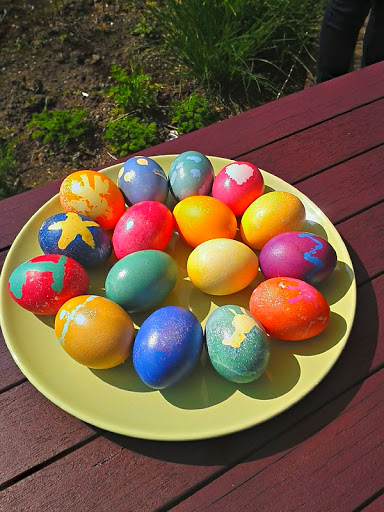 For the past six or seven years Thomas has been obsessed with making the perfect Easter egg. I can only assume this is a hang-up from his childhood (with German aunts and uncles) rather than a new-found religious streak...

At first he banged his head up against the fact that the UK has become an almost exclusively brown egg country and brown eggs just don't colour. One year we did get six white eggs off our dear doctor (who has a home farm) but beyond that the eggs were the first hurdle.

After that the colouring of his childhood seemed to be unavailable because of all these colouring regulations these days so the first few years saw brown eggs dyed browner and that wasn't very appealing.

Then we started shopping more in ethnic supermarkets and it came to our attention a year ago that Poles love white eggs. So off he went down to Thornliebank and returned hopping and skipping (carefully) with two dozen white beauties from the Polish supermarket.

Added to that the complex plan whereby he'd ordered German Easter egg colouring six months ago, had it delivered to my friend in Cologne and had her drive it back at Xmas - bingo - everything finally fell into place for our first ever brightly-coloured Easter eggs.

It was such a success I had better order next year's already.

I did feel sorry for his other Danish expat friend who had had the same problem. Having not discovered the Polish option, she had forked out for Waitrose's most extortionate pale duck eggs. With no decent colouring to be had she tried boiling them with beetroot in an attempt at achieving pink eggs, only to find out that expensive duck eggs mixed with beetroot gives exactly the same shade of brown as Asda smartprice eggs. I reckon she'll be going down the amazon.de route next year too.
Posted by Phyl at 1:03 am