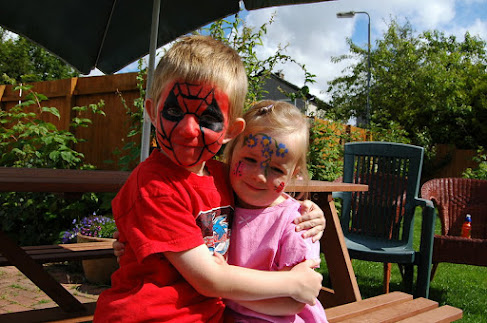 It has been terribly endearing today to watch my kids refind each other.
The biggies disappeared at the end of June to visit their Granny in France.
Anna doesn't cope overly well when they disappear for a two night weekend, so the summer holiday is worse and worse each year.
On day two Anna asked if they'd be back soon so I knew we were in for a long haul.
Suddenly, visits to and of 'Silly Mad John' increased tenfold. She told us of days out at the beach, plane trips, sleepovers and even 'eatovers' at his house. Isn't an 'eatover' a sweet concept for going to someone's house for a meal?!
Anyway, Anna moped and wasn't quite herself in their absence. The (almost-)baby of the family was forced to become the leader during their holiday. Even Amaia occasionally pointed at photos on the wall and pronounced their names clearly in a questioning manner.
By last week Anna was asking more and more often when they'd return and when they finally walked in last night there were tight hugs all round.
They could hardly get to sleep for excited chatter at bed time - one of the drawbacks to their sharing a bedroom, and today three and four have been glued together. They really miss each other when they are apart.
I suppose growing up in a divorced family is a new norm for many, but it is interesting to watch when it isn't your own experience. One thing is for sure - this kind of enforced separation five weeks every year definitely irons out a lot of the traditional sibling rivalries. They are all calmer and more loving towards each other. They really seem to miss and appreciate each other to a depth of maturity that is rare in such young children. Their bond makes me a very proud mummy!
Posted by Phyl at 1:14 am