AN EXPLOSION OF LANGUAGE 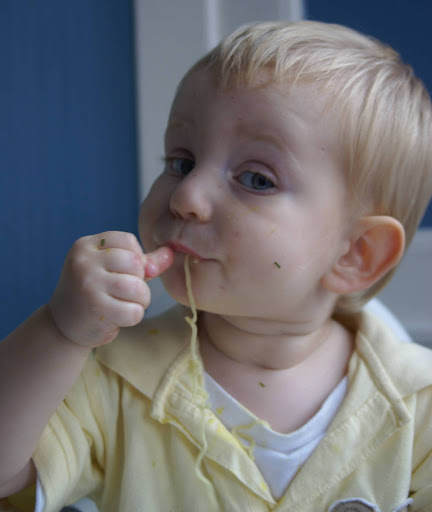 I mentioned that Pudge's short stay in hospital last week had improved his vocabulary no end and I think it has been the booster and inspiration he has been waiting for all these weeks. From his simple 'no want' and various synonymous commands last week, he's decided to parrot most of what we've been saying since Monday. It started Monday lunchtime with 'phone' when the buzzer went in the nursery, then later he said 'spoon' when he had one of the dozens of snack yogurts he's been eating to build himself up since his illness. Today he was running around the house pointing at doors saying 'door', picking up shape-sorter shapes and saying 'star', 'moon' etc. And next he picked up an apple and said 'pomme' (granted he also called a mango and a peach a 'pomme' too, but they are round fruits.) This evening he started trying sentences and asking questions. He asked Charlotte why she was crying when she was fighting Marcel over a bowl of ice cream. 'Lalo what oh-oh?' even with a raised intonation at the end of the sentence. He also told Charlotte to 'No, no, no Lalo go away, no!' So far, Marcel and Charlotte are so thrilled, they are going with the flow and trying to get him to repeat everything, but it can only be a matter of days before they realize exactly how much fun they can potentially have manipulating their new pet parrot. (We've all seen 'Meet the Fockers'.)
Posted by Phyl at 10:40 pm