An interesting way to get to know your neighbours 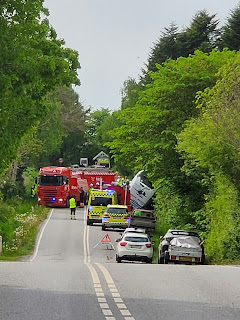 I'm concluding that Danes are a shy people. I moved to Stillebæk in the autumn of 2019. Ok, there has been Covid, but that didn't happen till we'd been here six months and this is a tiny village. Until mid-last week I had met (and spoken to) seven of my neighbours (that is to say two couples and three single individuals). Then a bus happened to crash in our main street on Friday at 2pm.

By 2pm most people were either home or working from home, the weather was stunning - full sun and mid-twenties. We were in the house when we heard some loud tooting and a screech of brakes. Out we wandered, all five of us, and saw a bus leaning at an incredibly precarious angle, which over the course of the afternoon only got worse and worse. How they managed to fall into a ditch on such a completely straight road was a puzzle. Several neighbours had the same idea. We hovered in little groups. An ambulance screeched up, followed by a police car, an emergency doctor, a second ambulance, two fire engines, a couple of tow trucks and then two vans from TV2 news.

Over the course of the next hour we found out a coach of pensioners from Jutland were visiting the bison farm in Morud for lunch and the newly-qualified driver had managed to swerve into a ditch on the way home. No one was injured but everyone was trapped. Once we had that news, relief swept over the village and everyone sprang into action. Four or five residents took turns at diverting traffic away from the closed main road. Others turned up with cool drinks for the traffic wardens and the kids who were hanging around the TV vans waiting, unsuccessfully, for their five minutes of fame. Many neighbours we'd never met introduced themselves to us and other new inhabitants of the village. By the time we'd been directing traffic for four hours they were arranging a village party and offering everyone strawberry plants! It seems to take something to bring everyone out their shell, but once out, I imagine they'll stay out.