Most grannies in cartoons and popular children's literature wear a skirt, round glasses, and have their hair swept up in a grey bun. They like knitting and sewing, gardening and baking with the grandchildren. I'm not sure my mum was a likely candidate for 90% of this.

She always wore trousers, her hair was a dark, and latterly salt and pepper afro, untameable and unbrushable. My mother didn't actually own a hairbrush, only an afro comb. This was something I found odd in my teens as the only other woman in the house with almost straight hair. If I couldn't track my brush down in a rush, there was no one else's to borrow.

And although she knitted, mainly baby items and only when Amanda or I were pregnant, she loathed and sucked at sewing in equal measures. Had we not had enough money for clothes, making them ourselves would never have been an option.

Gardening and even house plants were a bit of a no no too. I don't think there's a single flower in her garden, just bushes and trees and most of them donated by me. I actually cannot remember her ever baking anything in my life, and definitely not with us, her kids, or any of her grandchildren. I baked with her mother growing up, but never with my own. And it wasn't that she lacked a sweet tooth, there were copious amounts of cake and squares of millionaire's shortbread or similar in her house, they just always came in an ASDA or Aldi box.

She will be remembered for many things:

and much more, but nothing culinary, or so I thought... 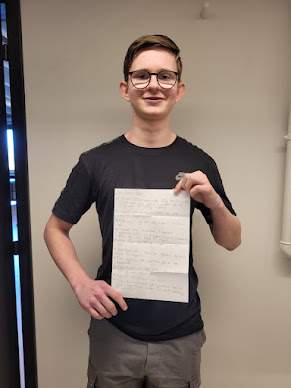 Last week in his English class, being the life and soul as always, he volunteered to bring in the British speciality of hot cross buns to educate his fellow classmates on UK culture. After a quick poll, that suggested 90% of his class hated raisins but loved chocolate, he decided to adapt the recipe, replacing one with the other. Having never made them himself, a quick google gave him a fail-safe recipe, thanks to BBC good food. He baked thirty and took them in the next day. So impressed was his teacher, that she took a photo of him dishing them out and asked him to translate and then write out the recipe... This then got back to management, who thought it would be a great story for the school's internet page, to advertise what a nice school it is. Léon, of course, thought sharing a BBC good food recipe, especially the week he'd missed Monday at school to attend his gran's funeral, was a bit impersonal so claimed this was his gran's family recipe. The school has now shared my mum's world famous hot cross bun recipe for anyone who wants to honour granny's memory by baking her buns. And given it isn't the BBC one, as the raisins have been swapped out for dark chocolate, and it is now written in Danish, no one can see the correlation! You couldn't make it up!

So, we now live on an island with 500 000 inhabitants who are now all potentially trying out my mum's hot cross bun recipe this Easter. If I had any religion in me, I'd like to think of her up there having a right old chuckle about the whole thing! It definitely isn't the legacy she'd have been counting on.

And for anyone who wants to try out her speciality (if you have google translate on hand anyway): 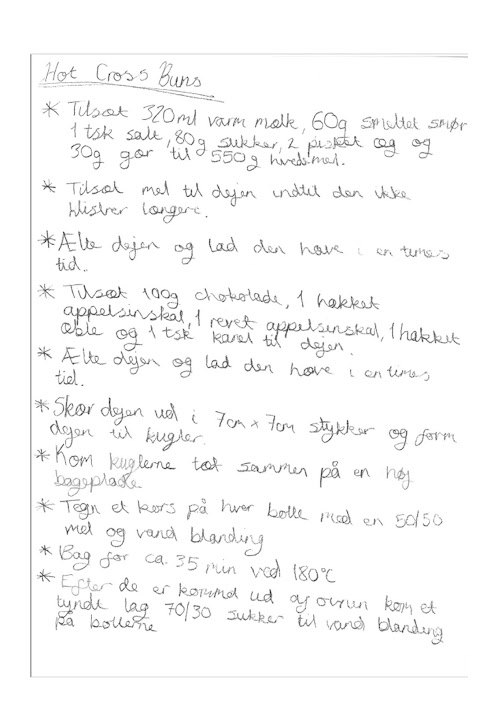