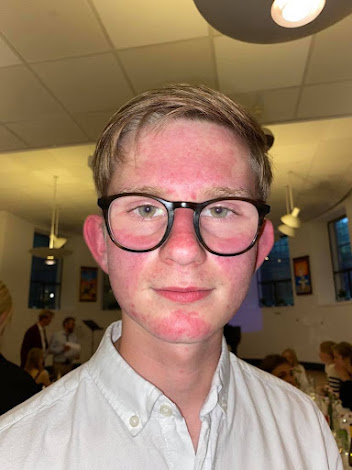 When Léon was a small child, he had a bit of an allergy to blue food colouring. It always manifested itself as skin irritation, rather than breathing issues, thank goodness, but still, he was sent home from school on several occasions when staff refused to believe it was an allergy rather than a contagious disease.

We thought it had gone. He's had various blue sweets and similar over the past few years with no side effects.

At the weekend we went to a family confirmation party in Copenhagen. They were serving blue fizzy juice to the teenagers. Léon had two over the course of a couple of hours. He was sitting on the opposite side of the hall to us with the other adolescents so we hadn't noticed till, when listening to one of the speeches from that corner of the room, Charlotte spied him from a distance. What a state he was in! His normally blemish-free skinned looked like he'd been roasted in front of an open fire.

Back in the day I would never have left home without an antihistamine in my bag but it's been so many years since this happened, I had no supplies. I double checked it was only his skin and he had no tightening in his throat or similar. What could we do? I suggested, for want of a better idea, that he should maybe drink some water in an attempt to dilute the effects or flush out his system. He disappeared into the kitchen area and returned with a glass of juice. I went for elderflower juice instead of water, is that ok? Of course, I said, positively encouraging him to down copious amounts as quickly as possible. Six elderflower juices later he looked more relaxed and laid back and was no longer scratching. I wandered through to the kitchen to get myself a juice too. Standing on the table where both Léon and I had served ourselves elderflower earlier in the evening was a large juice dispenser but it no longer contained elderflower, but rather mojito! I rushed to Léon and asked him if I could taste his elderflower juice. He handed it to me and I immediately noticed some tell-tale leaves floating on top. The silly wee bugger had only gone and downed six mojitos in the space of ten minutes, for purely medicinal reasons, while also mentioning how good his aunt was at making elderflower juice!

To cap it all, when I related the story to his aunt, she delved into her handbag and handed me an antihistamine! But I guess it had the desired effect, given he didn't seem in the least bothered by the irritation in his face afterwards and he was more than pleased that he'd managed to acquire six mojitos entirely innocently!