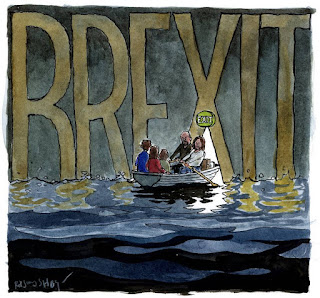 I wasn't sure whether I was going to blog about Brexit. But I figure that if I don't write about it this week, I am not sure I will be able to capture the essence of its impact on me at some future point down the line...

In the run up to Hogmanay, I wondered how I would be feeling about it all. I strangely imagined it wouldn't affect me, at least not significantly, because I escaped. I was one of the lucky ones. I have long accepted that this is my home and my future now and even if somehow Brexit had been cancelled, we still couldn't seriously consider uprooting the kids and interrupting their education again before they were done with school. I also believed that I'd somehow used up every last drip of Brexit mental energy I had over the last six or seven years, since the idea of a referendum on Europe was first mooted, so I honestly felt I had nothing left to give it. All in all, I thought I would feel sad for my friends, angry for the future denied to their kids, and my own niece and nephews but somehow distant and disconnected.

The effects of Brexit on my life will be so much less than they would have been had I remained at home. I still live in the EU, I even have a route back to an EU passport, albeit a cumbersome one. I need to meet some specific criteria. Firstly, the nine years' residence in Denmark have been commuted to six thanks to my fifteen years with Thomas. On top of that, I need to pass Europe's hardest language for citizenship exam: most countries require A2, or at most B1; Denmark is the only EU country requiring a minimum of B2 for citizenship, so with a pass mark of 02, my GPA of 10 last month has more than ticked that box😁. Some time over the next three or four years I also need to learn all sorts of utter nonsense to pass the citizenship exam. This is simply a a fun way most countries have of torturing foreigners who deign to attempt to integrate. I've tried the UK version which consists of nonsense questions that many UK citizens can't actually answer and the Danish one is the same. Having tried it with various Danish relatives, it is also nonsense, but it is something I will be able to learn rote form and eventually get the bit of paper. After that it is just a question of working a specific number of years and I will have completed the marathon back to where I was three days ago, before my EU citizenship, which I have had since I was five years old, is restored to me and I am once again the owner of an EU passport. So I have a path and I have assured my kids are all safe as they are all dual citizens.

In the run up to Thursday I still felt incredibly ill at ease with the whole thing. I still see no tangible benefit to their madness. I have been so disgusted by their antics over the last few months I am frankly embarrassed to show my UK passport at the border in case it somehow lumps me in with the mad crowd. We've heard the government threaten to starve the Irish into submission, we've had them threaten to and even pass a parliamentary bill to break an international treaty, we've had them pull the rug from under students who are expecting to be starting their Erasmus courses in less than four weeks with some make-it-up-as-you-go-along replacement that simply doesn't have the funding to get off the ground and certainly not in time for many whose courses depend on it. We've seen the government winging it with their Covid vaccine too - going against scientific advice on the four week interval between the two doses in favour of imagining that their new untested twelve week gap will probably, maybe, possibly be ok, if the government crosses its fingers enough and after all, if it isn't, they can always pay a crony or two to hide the results. They have become a laughing stock and at the same time they are no longer funny, but rather sad, mad and out of touch with reality. As Global Britain farcically runs from country to country trying to replicate some vaguely inferior version of a deal that the EU already has with each, it seems to be patting itself on the back at its success, while back home half the country is visibly screaming for help. They know the lunatics have taken over the asylum.

Isolationism is their only goal as far as I can see and it makes me angry and sad in equal measures. From a personal point of view I am incredulous. The amount of red tape the UK is landing itself with is unimaginable. I married a Frenchman and then a Dane. Both times we discussed which country to live in in much the same way as a couple would if one was from Glasgow and the other Aberdeen. Should we try one and if it doesn't suit us, try the other? That model was blown out of the water two nights ago. I have a daughter who is currently studying in Madrid. If she meets the love of her life there, her choices are diminished, but they are still open, but if any other student in her class happens also to fall in love, things are going to be so much more complicated for them. Unlike Charlotte, they can't go to Spain to be with their new partner for more than three months, nor can they bring them home with them. So relationships like the ones that have filled up my life from 1985 to 2020 and counting will simply, for the most part, fizzle out before they can begin. Children like mine - multilingual, multicultural and open to the world - will become rarities in the UK as their parents will never have the opportunity to conceive them. And yet my family is amongst the luckiest - my kids can live, love, study and retire to any one of 27 countries. In fact, they can even include the UK, as they have that passport too, but a few changes will need to happen before they consider that.

I awoke on Hogmanay on the verge of tears. Tears of anger, of frustration, of futility. Minutes went by when I busied myself with something else to the point where I could almost forget what was happening and then it would crash over me again like a wave in a storm. I felt incredibly alone, in a strange way too as no one else in the house was going through what I was going through. As the minutes of the day ticked on towards the moment when I, and no one else in the room, would have their EU citizenship forcibly removed, I even felt almost angry at my nearest and dearest because they could not know what it felt like, and I hope to god they never get to find out. As we neared midnight, our time, I was almost glad about the current lockdown for the first time, as it meant I had nowhere to go, no party, no need to be sociable or cheery and there was no need to say 'Happy New Year' because at the instant when everyone here would normally be wishing each other happiness, I was far from happy. As everyone breathed a sigh to leave behind 2020 - the most horrendous year in a century - I wanted to cling to it with all my might because for someone whose entire life has been Europe, losing my citizenship was even worse than 2020.

Two days on I am still angry, with nowhere to channel that anger but I expect my musings on Brexit are far from over. All I know is that I am safe and so are my kids - those who jumped with us and those back home with their get out of jail free card up their sleeve. I don't know what else I could have done and for now my greatest hope is that I live long enough to see sense return to the country I used to call home.