Now here's something I never in my wildest dreams thought would become a dilemma in my life, and no it's not global-pandemic-related. It's a flags versus fairy lights issue!

Before, when I lived in Scotland, the Xmas tree went up around Anna's birthday and came down just after Charlotte's. That was it on the Xmas-decorations front. Here in Denmark, or at least in our corner of Denmark, I've noticed Danes distinguish between Xmas decorations, such as your tree, which goes up mid-December till January 6, and winter garden decor which goes up around the end of October when the clocks change and stays up till around February. This kind of thing... 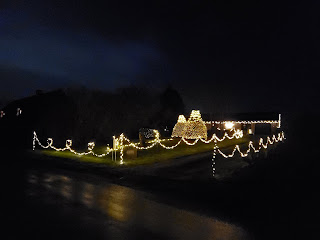 Last year I hadn't sussed the difference so took our garden lights down with the tree, but I'm now starting to realise that the garden lights are a winter hygge and happiness thing and not fully to do with Xmas.

One thing many of our neighbours had last year was flag Pole fairy lights. They look like this, (or you get them with vertical lights too): 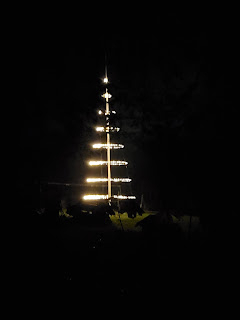 The kids thought they were really cool and I promised I'd get us some this year which I have now done and intend to put them up this weekend. However, now I have them, I realise you need to clip them onto the flag hoist to get them up which means we can't use our flag until they come down again. The problem is that the main time Danes fly their flags is to celebrate family birthdays and five of the 7 of us have a birthday during the winter fairy lights season. Even if we cut it short, all three of my daughters' birthdays are between December 19 & January 11.

So do I need a second flag pole? How do Danes with Xmas birthdays cope?!