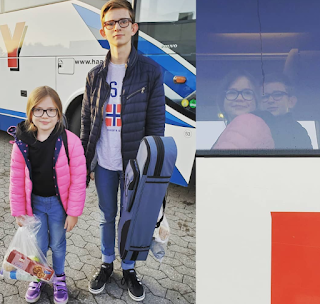 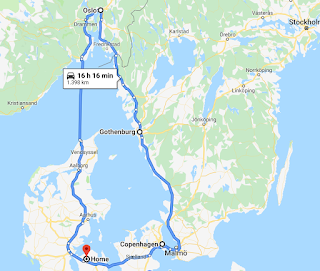 So, Three and Five are off today to Norway taking the ferry, returning on Sunday night via Sweden and Saga's famous bridge to play a viola/violin concert tour with their new band (though Léon was more intent on packing his football stuff as he'd heard rumours of them being allowed to play football in their free time against some Norwegian kids). This is the £98 foreign school trip I mentioned a month or so ago. I am a little alarmed at how unfazed my nine year old seemed to be to skip off into the bus without looking back! I know she had her big brother along and is still wee enough she felt it necessary to pack her stuffed llama to sleep with, but still - couldn't she at least look vaguely upset to leave me? 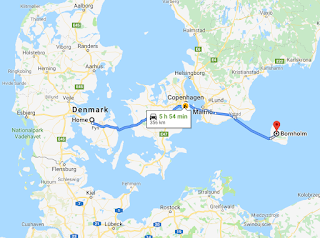 And, last night I was at school for a meeting about the end of Veflinge primary school trip. Anna had just completed her primary schooling in Scotland and had thoroughly enjoyed her week in Lochgoilhead last May. The opportunity to experience it again, only this time on Bornholm island was one of the ways we managed to sweeten the pill of the different school system, which meant she wasn't moving up to Léon's school till next summer.


And talking of pill-sweetening... we paid £240 for the Scottish end of primary trip and we were informed last night that the Danish one costs 400DKK (£47). The actual programme is almost identical, other than the fact that the Danish one involves a longer bus trip and a ferry, as it is on Bornholm, a Danish island situated between Sweden and Poland. As if that in itself wasn't good enough, they also added that the PTA would be covering the 400DKK. I thought at first, given I am still new to living fully in Danish, that they were saying they were keeping the cost down to 400DKK by having the PTA subsidise the rest but, nope - the only cost to parents is the pocket money you choose to send them with! That in a country with average salaries of £35K, rather than Scotland's £25.5K.... Hmmm.

The more I live here the more frustrated I get by the Scottish model. It is so much easier to look at countries who speak the same language to gain a model for how things could be done, when in fact, there are so many small countries within a couple of hours flight, where we could learn a lot, if we just took time to breach the language barrier.
Posted by Phyl at 11:46 am