I sometimes wonder if you need the patience of a saint to be mother to a 12 year old boy, or maybe  just a good sense of humour. I made chilli con carne yesterday and then popped out to pick Léon up from debating at school at six. On my way home I realised I needed some shopping so told him the only way dinner could be ready for seven was if I dropped him at home and popped straight to Aldi for 15 minutes. He cooks dinner at least once a week so it wasn't that he isn't capable in the kitchen, he's just lacking somewhat in the memory-span department. I emphasised how important it was to the point where he impressed me by taking out his phone and writing himself a note on it. The instructions weren't hard - Put four portions of rice in the rice cooker and press on, then relight the gas under the chilli, but quite low just to keep it warm. What could possibly go wrong? I dropped him at 6:10 and was back by 6:30. I walked in. The chilli was on (a little too high but on at least). The rice was in the rice cooker, with water (no salt), plugged in but no lights on. Léon, Anna and Amaia were happily microwaving three hot chocolates complete with mini-marshmallows, all jolly and happy. 'What was the most important thing I asked you to do, the only thing I absolutely needed you to do?' I asked 'Put on the rice', he replied proudly. 'And is it on?' I asked more tentatively... 'Well it's in the rice cooker, oh it's not on! - one out of two isn't bad, is it?' We ate half an hour late! But hey, at least they had hot chocolate! 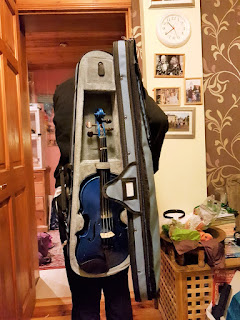 Fast forward a few hours. After violin practice, he was last seen heading to his room with his violin carefully strapped on his back, pity he forgot to close the case, and thank goodness for that tiny little Velcro strap round its neck. He spent most of this evening trying to track down the neck rest for it which had dropped out the case as it wasn't Velcroed down... turned out to be in the cupboard with the school juices, where it had dropped out when he had been making his lunch last night while apparently wearing his violin.