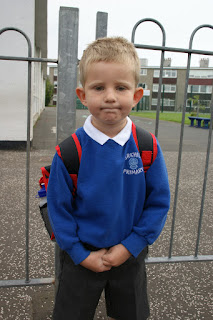 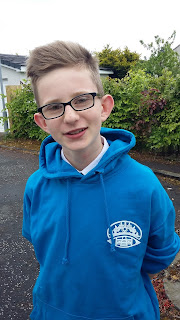 I would like to take this opportunity to praise my kids' primary school. I have no idea how they do it, but they have managed it all three times (so far).

For the first six years, they adore their school - it's the best thing since sliced bread and they couldn't even begin to contemplate going anywhere else, then somehow from the p7 February holiday onwards, they begin to disconnect.

First there's the week away, then the show and whatever is going within the actual classes, but before they even get to the induction days at Mearns Castle, they are ready to move on. This week has been induction week and Léon hasn't looked back. He has no desire to return to his primary on Monday for the last two weeks, a little nostalgia maybe that will drive him onwards to the graduation ceremony and prom, but basically he's already moved on mentally. He's so ready to be in high school, it's almost frightening. He actually has no kids from his primary class of seven years in his new high school class, and still he's completely unfazed. I have no idea what tricks of the mind they use to prepare them to leave, but they have been 100% successful all three times, with the timing perfect.

I feel a little emotional, knowing how fast they come out the other end of this next phase in life, but am so grateful that they've looked after him and helped him grow into the man he will soon become.
Posted by Phyl at 10:57 am