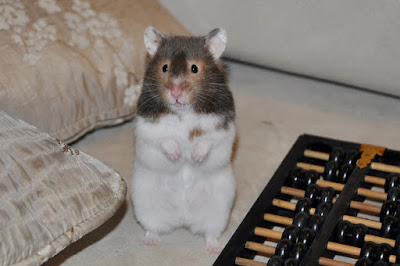 Whereas Rosie was a bright and wild escapologist, Lily was a cuddly, loyal and sweet pet. She loved to be taken out and stoked and put back in her cage. She never once escaped or even tried to (unlike Rosie's weekly escapades in the early days). We could even take her into our bed once the kids were asleep to play with her!

She's been noticeably aging since the end of July, no longer running for hours on her wheel and the last week or so she's been rather wobbly. On Wednesday, I thought she was older and wobblier still. I noticed she was struggling to get up her ladder, so I lifted her up and gave her a wee pat. She was quite content. Later she was sitting in her jar breathing faster than usual so I gave her another wee pat. But at dinner time when I passed she was lying motionless on her straw looking a bit too peaceful for my liking.

She had died some time in the previous hour because I had spoken to her an hour earlier.

Now we have the dilemma that Amaia is crying hysterically and claiming she can't go through this pain ever again so never wants another pet, while Anna is crying just as hard and saying the only thing that will help her get over it is - you guessed it - a new pet!

As for me - I'm going to miss my wee beast. Soft and gentle and a good listener. Already last night Charlotte was eating a pomegranate and I was upset at the thought that I never gave Lily a piece of pomegranate and now it's too late. Silly, soppy old git.
Posted by Phyl at 10:56 am