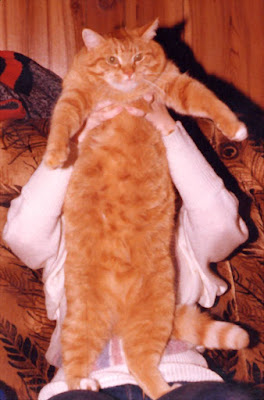 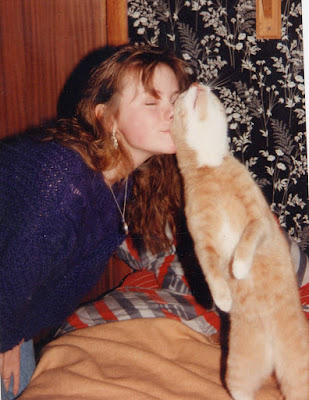 I grew up with cats. First, there was the grumpy, chunky one with the odd name 'Snoopy' (we were kids!). Then there was the skinnier, more placid lapcat 'Muffin'  (named by a friend of the family who stepped into our squabble over what to call him, with the simple statement 'He's kinda muffin-coloured, isn't he?') So from 1981-1996 I was around cats a lot of the time. Although the cat stayed with my parents when I left home as a teenager, I was his holiday babysitter. I haven't had one of my own since, originally for the simple reason that with family abroad, I was away too many times a year to bother with the holiday cover, but latterly more because I've lived on a bus route since 2007. I figure with a double-decker passing every ten minutes, 19 hours a day, it'd have to be a very street-wise cat not to end up dead meat and I don't fancy having to scrape the kids' dearly-beloved off the road once a year. Hence the succession of (safely-caged) hamsters...

However, I always sort of figured I'd spend my old age, once the kids had flown the nest as some kind of crazy cat woman - perhaps a bit like Mrs McTats in one of the kids' favourite books. 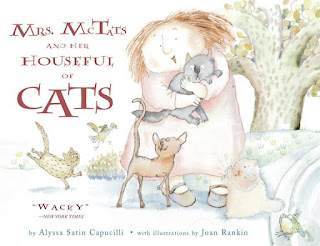 As early as fifteen years ago, I started to notice Persian cats were starting to make me a wee bit wheezy, but normal moggies were fine... then a few weeks ago Charlotte and I visited a friend with a cat. Lots had told me she'd been having sneezing fits every time she was around her friend Hannah's cat, and sure enough, as soon as Siobhan's cat wandered in Charlotte's nose started to run. I was fine though and even let the cat sit on my knee for a few minutes. On the way home, however, I started to feel as if my airways were literally clogged with fur and I started to wheeze. By the time I got home I was in a much worse state than Lots and it took antihistamines and three blasts of an asthma inhaler to make me comfortable enough to get to bed and fully 24 hours to get back to normal. So I've monitored it since and it seems I have indeed developed an allergy to ordinary cats of the type I used to live with. My doctor has now advised me to try having coffee with my friend who owns a golden retriever as she suspects that fur is my trigger.

Am I really going to have to end up a crazy old woman with a house full of these?